The on-screen couple shows serious expression in an image, while they are seen embracing each other in another shot.

AceShowbiz - Universal Pictures has given a look at upcoming "The Adjustment Bureau" by debuting the first production photos from the film. Exposed in the stills are lead actors Matt Damon and Emily Blunt.

Donning a white top, Damon is seen discussing something seriously with Blunt who is suited up in a black dress in one image. In the other shot, meanwhile, the two are featured embracing each other while staring at something.

In the film, Damon plays ambitious politician David Norris who meets beautiful contemporary ballet dancer Elise Sellas while he is on the brink of winning a seat in the U.S. Senate. But just as he realizes he's falling for her, mysterious men from The Adjustment Bureau conspire to keep the two apart.

The group will do everything in their considerable power to prevent David and Elise from being together. In the face of overwhelming odds, David must either let her go and accept a predetermined path...or risk everything to defy Fate and be with her. This sci-fi drama flick is set to hit U.S. theaters on July 30. 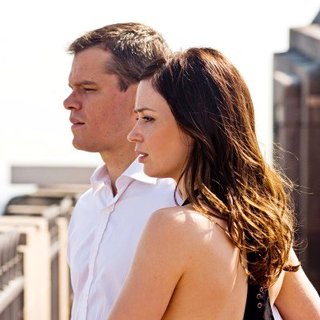 Artist of the Week: Jason Castro