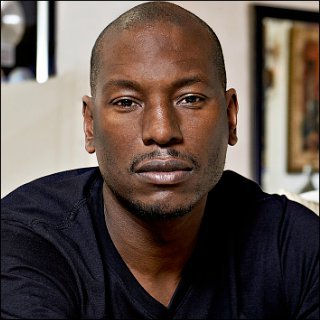 Able to obtain great accomplishment in every field he entered - be it modeling, singing, or acting, Tyrese Darnell Gibson certainly has scored more than what many other artists have done in the entire length of their careers. Born on December 30, 1978 in Watts Quarter, Los Angeles, California as the youngest of four children in his family, he, along with his siblings, was raised solely by his mother, Priscilla Murray Gibson, after his father left them in 1983. This multi-talented guy first gained national attention when he showed up in the 1995 Coca-Cola TV commercial as its new face of the year upon winning a talent search held by its company, subsequently led him to other appearances for Guess? also Tommy Hilfiger.

Afterwards developed a successful modeling career, Tyrese apparently could not push aside his wish to develop a career in music industry, a goal he had aimed to achieve since he started singing at the age of 14. Already made his foray into screen production through one-time performance in several TV series, such as "Hangin' with Mr. Cooper" (1992-1997) and "Martin" (1992-1997), he then released his self-titled debut album on September 29, 1998 under RCA Records. It amazingly became a smash hit over the country in quite a short time, soaring to the top position of Billboard Heatseekers also the top 20 of Billboard 200 and ultimately was certified Platinum.

This initial attainment undeniably led Tyrese to gain wider public notice all over the country, moreover after he gloriously nabbed the title of Favorite Soul/R&B New Artist at the 2000 American Music Awards. Also became a Grammy nominee for Best Male R&B Vocal Performance through his single, "Sweet Lady", in the same year, he continued to solidify his status in music industry, releasing two other albums, "2000 Watts" (2001) and "I Wanna Go There" (2002), which both satisfyingly received Gold status. During this period, the tall singer also encountered fair success in his acting career as his first film feature, "Baby Boy" (2001), resulted quite well both critically and commercially.

Following the achievement of this gritty romantic drama picture, its director, John Singleton, decided to once again collaborate with Tyrese, thus cast him alongside Paul Walker, Eva Mendes, and Ludacris in his 2003 effort "2 Fast 2 Furious." Scored a fantastic income of more than 236 million U.S dollar worldwide, the flick consequently catapulted the 25-years-old hunk to international attention, giving him larger opportunity to secure more high-profile film roles, like those in "Flight of the Phoenix" (2004) and "Four Brothers" (2005). Next billed to star in the 2006 projects of "Annapolis" plus "Waist Deep", he took time to return to his original interest, working on a double-CD project entitled "Alter Ego" (2006) which featured R&B tunes on one disc and hip-hop on another. Besides doing solo, he also took the pleasure of working with his 'buddies' Tank and Genuwine. The three of them formed a group simply named TGT after their stage name's initials while still maintaining solo career.

Got engaged to girlfriend Norma on June 7, 2007, Tyrese scored huge hit once more in July 2007 when his starring vehicle "Transformers" remarkably soared to be one of the biggest summer blockbusters that year, grossing around $319 million in the States only. Things continued to glide rather velvety for the actor afterwards as handfuls of subsequent roles were smoothly added into his acting resume. Among them were those in "The Take", "To Each His Own", and "Death Race" (2008), which also stars Jason Statham, all slated for 2008 releases. The same year, in the meantime, would also mark the arrival of his next studio album under his moniker Black-Ty, "Black Rose", that has been confirmed to feature some celebrated music stars like Akon, Justin Timberlake, Ne-Yo, Timbaland, and Celine Dion.