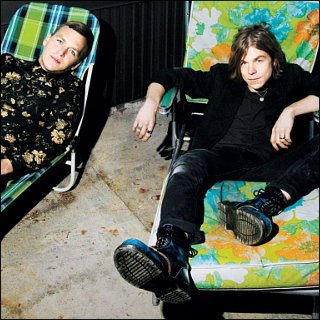 %cCage the Elephant% were formed in Kentucky by three high school friends; %cMatt Shultz%, %cBrad Shultz% and %cJared Champion%, along with two other friends %cLincoln Parish% and %cDaniel Tichenor%. Before rocking with Cage, they played music in a band under the moniker %cPerfect Confusion% which were disbanded when they left.

In 2007, they got slots at major music festivals, South by Southwest, Bonnaroo, and Lollapalooza. After signing a deal with Relentless Records and moving to London, they started working on their debut album and released it as a self-titled effort in 2008. They received favorable review from music critics and their single "Ain't No Rest for the Wicked" peaked at No. 32 on U.K. Singles chart.

They began to showcase their music in the U.S. as they were tapped as a supporting act by %cSilversun Pickups% and %cManchester Orchestra% in 2009. In the same year, they returned to Bonnaroo and Lollapalooza as one of the musical guests. From the road, they took their music the screen - "Ain't No Rest for the Wicked" was featured in movie "The Bounty Hunter" and they appeared on "Late Show with David Letterman".

On January 11, 2011, Cage the Elephant dropped a second studio album "Thank You, Happy Birthday" which was produced by the same man who helped them with the eponymous record. The album debuted at No. 2 on Billboard Hot 200 with 39,000 copies, marking their best-ever charting effort and best sale week.