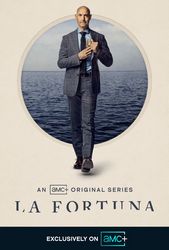 In "La Fortuna", Alex Ventura (Alvaro Mel), a young and inexperienced diplomat, unintentionally becomes the leader of a mission that will put all his convictions to the test: to recover the sunken treasure stolen by Frank Wild (Stanley Tucci), an adventurer who travels the world plundering items of common heritage from the depths of the sea. Forming a unique team with Lucia (Ana Polvorosa), a combative public official, and Jonas Pierce (Clarke Peters), a brilliant American lawyer with a passion for old pirate tales, Álex sets out on the adventure of a lifetime, on which he learns about the importance of love, friendship and commitment to your own beliefs.