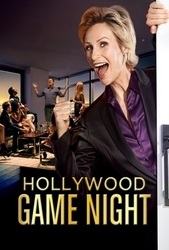 It's a cool summer's night, and you're at a fantastic party in the Hollywood Hills. As the house band rocks, you mingle with some of today's biggest names in entertainment, including "Hollywood Game Night's" host with the most, Jane Lynch! So what could make this night even better? How about a chance to walk out with a mountain of cash? One-hour alternative series.

It could happen to you on "Hollywood Game Night." Every week, ordinary people and celebrities gather for a great party. Then two teams made up of a civilian and celebrities compete in a series of outrageous games. Are you a walking encyclopedia of celebrity trivia? An expert on all things pop culture? If so, you just might have a chance to take home up to $25,000. Not bad for a night's work!