"If you ever want me to confess, don't rip out my finger nails, just make me eat like a vegan for a f*cking week." - Fast Food Chain CEO

At Camden Yards, Baltimore, an off-her-game Veep forces a smile at the launch of her healthy eating initiative.  Out of her earshot, the "Let's Get Moving," campaign brings yawns and stomach growls from the food manufacturing guys while Dan networks with both health advisors and the snack-food execs. The Veep's intrusive photographer, Ken, pets the Vice President with his "feely touchy hot hands." Meanwhile Gary shows off his Veep go-fer skills to the food execs desperate for entertainment.

Is this for real? ‘Cause if it is, the best thing for her legacy is that she's assassinated before she starts showing." - Mike

Selina pulls Amy aside to drop a bombshell. On a Springsteen and wine-infused evening, things got a little bit out-of-hand with Ted, and now - even though her most fertile reproductive years are behind her - the Veep is pretty sure she's pregnant.  Amy is appalled; an unwed mother one aneurysm away from the presidency does not play well in Washington politics. Going to Mexico for an abortion, killing the doctor and all involved would be far too complicated: The Veep will have to keep the baby. Amy promises to pick up a pregnancy test.  They agree to keep the news between themselves - Selina hasn't even told Ted yet - but Amy immediately calls Mike. They must keep a lid on this one.

Gary fetches real coffee while Amy and Dan head over to the West Street elementary school to set up the Veep's afternoon visit. When Amy makes an emergency stop at the pharmacy, Dan assumes Amy's pregnancy test purchase enhances his job prospects: "Is Jonah the dad? Is that why you look like you want to drink a bottle of Drano?"

"Every which way but douche, why don't you answer my question. Now." - Leon West, reporter

A gas main break keeps the Veep and the "Let's Get Moving" campaign stuck at Camden Yards, delaying her arrival at the school. Mike yucks it up at the press briefing across the way until "Beltway Butcher" Post reporter Leon West presses him about the Veep "shit-canning" a Secret Service agent for smiling at her. Mike dodges, but the story's going to break. Phoning Amy that West is labeling the Veep's actions repugnant, a bad connection garbles Mike's message and Amy thinks the press now knows about Selina's pregnancy.  The Veep's reaction to the news is muted after she's learned the ever-lurking shutterbug Ken reads lips.

"Is there anything else I should get for my sister, like maternity underwear?" - Gary

Without Gary to feed her information, the Veep enlists Jonah to throw her stats about the Oriole players during their photo op. But when he tells her there's more than one starting pitcher on the team, Selina realizes he doesn't know anything about baseball... or so she thinks.

Dispatched to buy more pregnancy tests, Gary hides his White House credentials in his jacket when he makes the purchase, explaining that his "sister" has been "pretty busy" these past few weeks.

"I am so sorry I'm late. I have never meant those words more." - Selina

On the baseball diamond, Selina gets a booty call from Ted who's astonished when Selina explains how his life is about to change: Since the press knows, marriage is the only option, with a back-dated engagement.  The lip-reading Ken almost loses his job for offering his congratulations to the Vice President.

Finally, the Veep arrives at West Street Elementary with Leon West lying in wait. After Selina hits the little girl's room, she delivers her open cup of pee to her team huddled in the school hallway. While they work out who actually knows what, Selina accidently splashes Gary and herself just before glad-handing West and wiping what remains on Ken's sleeve, shoulder and back.

The day almost over, the Veep enjoys the students until Gary whispers in her ear, "you are very, very pregnant." 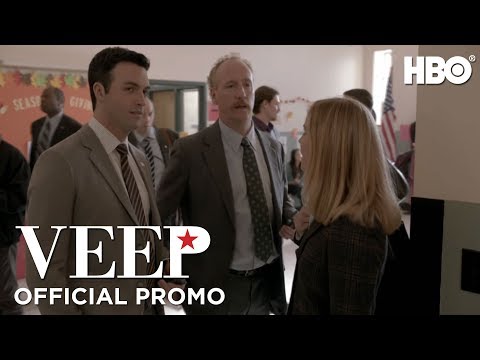