"Mark Rivera called me a diva in his column. Stupid f*cking midget." - Selina

On the way to work, an upset Veep flanked by Gary and Amy complains the morning papers are focusing on the fashion feud between the First Lady and Selina.

Gary shows his boss photos of "canine-didates" to be her official dog. Selina believes a dog will mark a fresh start with her college-aged daughter Catherine, but she will not tolerate a "ball of yappy hair, sh*tting its body-weight every 30 minutes" diva-dog.

Fruit baskets, flowers and wrapped presents await the Veep, who's celebrating her 20th year in Washington with a party that night at her residence. Seeking advice, Selina asks about Mike's dog.  Mike reluctantly produces a wallet photo of "Simon," whispering to Dan, "leave my fake dog alone."

Jonah blusters in and out, assuring Selina that the President's absence from the evening's festivities has nothing to do with her rift with the First Lady. Selina decides to neutralize the FLOTUS cat-fight story by un-diva-ing her party: "Lose those huge photos of me."

"I'm like the last guy in a human centipede on this."

Mike is dragging his feet with the announcement about putting ex-oil guy Chuck Furnham on the Clean Jobs Task Force. Amy orders him to do it at the reception for Sen. "rape-y" Reeves' Memorial Recreation Center.

There's a hurricane named "Selina" on the official list of names for next year's storms. Amy assures a horrified Veep that the people won't equate her with a natural disaster, but he'll work on getting the name changed.

At the rec center pool, jokes fly about the late Sen. Reeves' proclivities as the Veep consoles his widow Edna who's more interested in Selina's feud with the First Lady.

A betrayed Sen. Doyle goes "Black Swan" over the pick of Chuck Furnham for the task force.  Across the room, Selina confides to her nominee that the announcement may happen today, while Sen. Hallowes complains that Chuck isn't oily enough. When oil's Sidney Purcell vociferously confirms this, Mike tries to keep Chuck quiet in the bathroom.  It's too late; he's already leaked the news.

With Sen. Doyle prowling for the Veep, and Purcell and Hallowes closing in too, the Veep makes a "widow-walk" escape with Mrs. Reeves. The widow asks if the First Lady really calls Selina "Creepy Veepy."

Waiting for her mom, Catherine is pleased to learn about the Veep dog search.  Hours later, Selina finally shows up, but the Furnham fires are yet to be put out.On the limo ride to the party, Sen. Doyle chastises Selina's lack of balls. The Veep stands up for herself as Catherine listens in.

Selina loves Dan's idea to announce the Veep dog as a way to buy time to figure out the clean jobs fiasco - but hates Catherine's choice - a terrier.

Selina greets her guests with the help of Gary's whispered prompts: "Wife not daughter!"

At the party, word comes that the President, bowing to oil pressure, wants Sidney Purcell on the clean jobs task force - thus shredding the Veep's credibility.  Master manipulator Dan steps into action, offering Purcell an unofficial back channel to the Veep, then congratulating Sen. Doyle for pushing Furnham out and getting the much oilier Purcell in the bargain. Doyle is flummoxed.

Catherine finally loses it over her mother's attempt to control the weather. They make up with a brief heart-to-heart, and Selina promises Hurricane Selina will go unchanged.

Later, Sen. Doyle eats crow to get Chuck Furnham back on the task force agreeing to sponsor the Veep's filibuster reform bill.

Jonah puts the kibosh on the Veep's dog choice because the First Lady wants one too. "We simply can't allow the possibility that your dog could overshadow F-DOTUS." Selina forces the "rat-faced terrier" on Mike after she learns the truth about Mike's "bullshitsu" - and, in the process, offends Catherine again.

As the party winds down, Jonah hits on a soused Sue who states "there's not enough alcohol in the world" for that to happen. After making sure Amy does kill Hurricane Selina - and a double white wine -the Veep mingles, with "Gary-oke" in her ear. 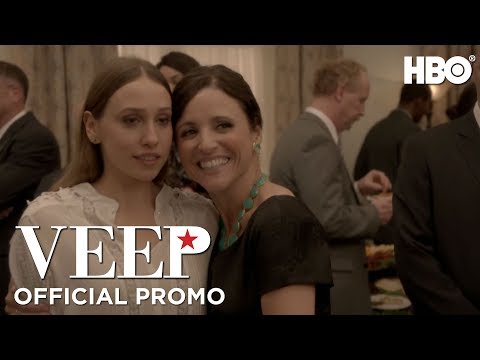