Ricky shows up at the Juergens to find out about the fight with Ben. George tells him he handled it and that he told Leo that Ben must apologize to Amy. He reiterates that Leo said Amy ruined his son's life by dating Ben when she knew she was pregnant with Ricky's baby. Amy is comforted and moved that her father has her back.

Ricky, angry that Leo said those things about his girlfriend, goes to confront Leo. Leo hides in his office from Ricky and Leo's assistant tells Ricky that Leo loves him like a son. This realization makes Ricky step back from his anger and realize all Leo has done for him. He relents. Leo realizes he needs to apologize to Amy. Amy accepts his apology wholeheartedly. She knows how much Leo loves his son because George loves her just as much.

Adrian finds out that Amy said that Adrian got pregnant and is marrying Ben to get back at Ricky for dating Amy. Adrian refuses to allow Amy to throw her a baby shower. At school there is a blow up in the hallway. Amy yells that she's tired of being a teenage mom, Adrian says she'll have it harder because she's never had a best friend and support system like Amy has, Ben starts to apologize to everyone for saying the things he said and tries to explain Amy and Adrian's intentions in regards to the baby shower and how Ricky's history caused all of it. Ricky yells at all of them for making him the cause of their discontent.

Ricky is embarrassed for sleeping with so many women. He's emotionally damaged and had sex with them to hide from his problems. He's become some prize that they all fight over and everyday he's reminded how many women he's hurt. This outburst really opens everyone's eyes to the truth behind Ricky and helps them put to rest the competition that's been brewing.

Amy attends Adrian's shower along with other girls who appreciate Adrian for her wonderful qualities. Adrian has a beautiful shower and at last, there is peace.Meanwhile, Ashley and Toby, her new study buddy, grow closer.

The Secret Life of the American Teenager 3.23 (Preview) 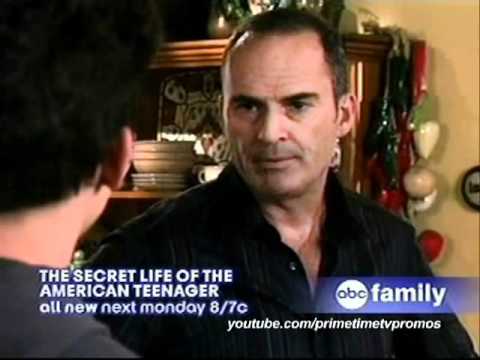