In part two of the season 5 finale, the groundskeeper, aka Dr. Jekyll, frees the heroes from the cell. He speaks of a dangerous plan to defeat the warden, aka Mr. Hyde. They all venture into the Land of Untold Stories. It's a place where outcasts from other realms have come to find safe haven. In Jekyll's old apartment, he shows off a serum he created to separate the good and evil in a person. He adds the final ingredient when the warden's right-hand man shows up forcing him to drink something else. Moments later, Mr. Hyde appears.

The heroes flee the scene leaving Mr. Hyde to inject himself with the serum. Moments later, Dr. Jekyll emerges from with Hyde. They are separated. Hyde moves in to kill Jekyll, but his efforts are thwarted by the return of the heroes. Hyde is knocked unconscious. The heroes flee again - this time with Dr. Jekyll alongside. Their freedom doesn't last long. The heroes are trapped in a dead end alley as Hyde closes in.

In New York City, Mr. Gold has checked into the Hotel D'Or where he gives a hundred bucks to the staff member who brings him room service. The generous tip comes with a warning that things are about to get messy. Regina ignores Gold's "Do Not Disturb" sign to make a deal. She needs his help to get Zelena out from the realm where she's trapped and he needs the Evil Queen's help to getBelleback. What Gold doesn't know is that Regina is serving as a distraction so Emma could steal the Olympian Crystal. Too bad Gold is hip to their plan.

Gold swipes back the Olympian Crystal from Emma. He only played along with their ruse to get what he needed to find Belle. He's about to put an end to Regina and Emma when Henry storms in. He neutralizes Gold as well as the power that's in the Olympian Crystal by using the Grail. Henry declares that he has destroyed magic. He's shocked to discover that David, Snow, Hook, Zelena and Belle are trapped in another realm. Now they have no way of getting them back. Or do they?

Emma tries to console Henry. She lets him know that Regina and Gold are off to find a way to save the others. It's at an outdoor herbalist's shop. The Dragon is there. He won't help Gold, but he will assist Regina. It's imperative she win for all. The Dragon can't open the portal but there is hope. There's magic everywhere. You just have to believe.

Henry believes making a wish in a fountain may be the key. Everyone has to be onboard. So everyone makes a wish. It's still not enough. They need more. Henry climbs atop a statue. He yells out to the people of New York City. He needs their help. He wants them to believe in magic. Incredibly, the people of New York respond. Everyone in the area makes a wish in the fountain. The coins they throw into the fountain make their way into the other realm. The portal is opened. The heroes jump inside.

FLASH! The heroes transport themselves back to their loved ones. Hugs are exchanged. Cheers erupt from the crowd. Henry is disappointed to see that the people of New York think everything they just witnessed was just an act. Emma explains that it's the only way they can process it. None of this can take away from the fact Henry has done the impossible. For one brief, incredible moment, he made the world believe in magic.

Regina made a second wish at the fountain. She wanted the Evil Queen to go away forever. There may be a way to accomplish that with Dr. Jekyll's serum. Enough was salvaged for one last dose. Once Regina uses it, she must take advantage of the brief moment when the Evil Queen doesn't have her magic. There can be no hesitation. The injection is made. Regina stands face-to-face with the Evil Queen. Then she rips out her heart and crushes it. The Evil Queen is reduced to nothing more than a pile of dust.

Henry is thrilled to learn that Violet's father isn't really from Camelot. He's from Connecticut. She's glad to be in Storybrooke. The two of them share a sweet kiss as Henry's moms watch from afar. Regina declares "Operation Mix Tape" a success. In other kissing news, Emma tells Hook that she loves him before planting a passionate smooch on him in the middle of the street. 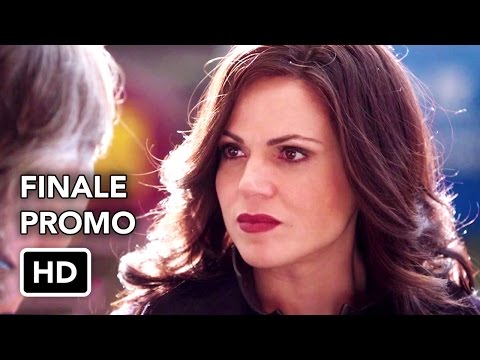