In Arendelle past, Anna returns to her cell with the urn in her hands to spring a trap. Too bad Aunty Ingrid is one step ahead of them. She shackles Anna. She had to be prepared in case Elsa didn't believe her lies. Ingrid forces Anna to tell her the story of a Norse legend involving a mirror. A spell made people see only the worst in the ones they love. Ingrid casts this spell on Anna.

Anna approaches her sister with the urn in her hands. She's different now. Ingrid admits she's under a spell, but says it's one that simply brings her darkest thoughts into the light. She orders Elsa to use her powers on Anna. This doesn't happen. Anna ends up trapping Elsa in the urn. She snaps out of her spell as a furious Ingrid decides to embrace the monster everyone believes her to be. She freezes everything and promises the urn-bound Elsa that they will find their third sister no matter how long it takes. Later, Rumplestiltskin approaches Ingrid. He wants the magic hat back. He swipes the urn for leverage. He'll trade it back for the hat.

In Storybrooke, Regina is stunned when she hears that Emma is trying to ditch her magic. Her words convince Mary Margaret and David that they need to embrace what makes their daughter special. They want to search for Emma, but the locator spell is gone. So is Elsa. Elsewhere, while in the library, Robin Hood finds something Regina needs to see right away. Mary Margaret, David and Henry continue their search for Emma without her.

Emma comes around after her car crash. She realizes the Snow Queen she sees in the road is just a vision. She doesn't buy into her claim that Rumplestiltskin is going to double-cross her. Emma arrives at the abandoned manor. Gold is already there. He uses the dagger to summon the hat. He tells Emma to step through the door where her magic will be taken away. He admits that he wouldn't step into that room, as he's a person who always chooses power. He's not like her. She always does the right thing.

Emma thanks Gold. She turns toward the door as sparks fly everywhere. Outside, Gold traps Hook against a fence before he can rush inside. He doesn't know someone else has already made her way to Emma. Elsa knows how scared she is, but giving up her magic is not the answer. Elsa says that the only way to ever be in control of your powers is to embrace them. She offers her hand to Emma. Once they both join hands, the sparks that were flying throughout the manor cease to exist.

Gold is disappointed when he realizes that he didn't get the savior's power. He admits that he still needs a heart from someone who knew him before he was the Dark One. He takes Hook's heart in his hand. He orders him to find a way to fill the hat with the power it needs. After that, he'll kill him. Hook rushes inside to hug and kiss Emma. He sends her outside to see the others so he can collect the hat on the sly.

Robin Hood shows Regina a page from the storybook. It's a picture of the two of them kissing in the pub. It proves that Regina's fate could have gone in another direction. The page appeared in Robin Hood's satchel. It's a sign of hope.

The Snow Queen escapes from her Gold-produced prison. She magically places a ribbon on her wrist. In Arendelle past, Ingrid digs the magic hat out of its hiding spot. She's about to contact Rumplestiltskin when the apprentice appears. He tells her that the sorcerer has found a match for the perfect sister she seeks. This person hasn't been born yet. If she hands over the box, she can enter through a door that'll lead her to her happy ending. Ingrid hands over the hat and steps through the door into our world. The year is 1982.

In present day Storybrooke, Emma is reunited with her family. She proves that she has control over her magic again by producing a fantastic fireworks show in the night sky. The good times don't last long. Both Emma and Elsa realize they are now wearing ribbons on their wrists. They feel their powers being harnessed.

The Snow Queen tells Gold that the ribbons bond the three sisters. She now holds the power to cast a spell all over Storybrooke. Gold warns her not to overestimate her power. The Snow Queen warns him to not underestimate it. Magic shoots out of her ribboned hand. It smashes the mirror. The Snow Queen smiles as her reflection explodes and dissolves into a billowing cloud of glittering dust. It's likely an ominous sign of what's to come. 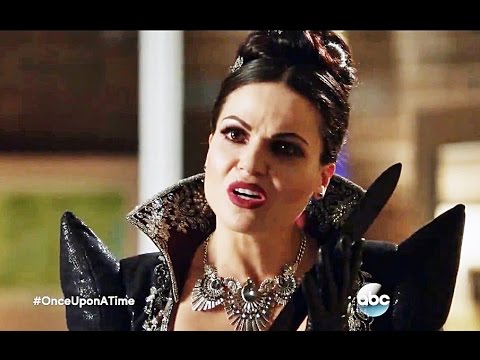