Felix leads a group that tosses Neal into a pit far away from where Henry is being bullied by another Lost Boy. Pan is enjoys the battle the two lads have with sticks, but thinks the fight would be so much better with swords. He convinces Henry that anything is possible in Neverland as his stick turns to steel. The battle continues. Henry strikes hard with his sword. He chops the Lost Boy's stick down to nothing. He swings mightily as he strikes his opponent's cheek leaving a nasty gash. Henry says he's sorry for hurting the Lost Boy. Pan says that's not necessary. Lost Boys never apologize. Henry revels in his victory. He's becoming just like the others.

In the past, Killian Jones was second in command on a ship called the Realm of the Pearl. It was captained by his brother, Liam. They are about to set sail on a mission for the king to a strange land. Liam gives Killian a sextant as they embark on what's to be a hero's journey. Their ship comes under attack. Liam orders that a sail made from the feathers of the great creature Pegasus be deployed. Their ship now has the same power the horse had. It can fly! They are off to follow the second star from the right.

Emma and the others realize that Neal lost hope during his time on the island. Everyone fears the same may happen to Henry. They need to get him a message to let him know they are coming for him. Mary Margaret believes they must trap a Lost Boy. While looking for rope, David collapses in the jungle. The Dream Shade poison in his system is killing him. Hook knows of a way he can be saved, but David doesn't want to risk their ultimate mission to save Henry. He finds an insignia that belonged to Hook's brother. It leads him to believe that a sextant that can get them off the island may still be there at the top of a place called Dead Man's Peak.

David realizes he may not see Emma and Mary Margaret again. He gives them both a heartfelt goodbye as he and Hook embark on their quest to find the sextant. The two men chat about their brothers. Hook recalls the days when he first arrived in Neverland. It was to find a plant called Dream Shade. It's supposed to be able to heal any injury. In the past, Peter Pan appears to let the brothers know that the plant they seek is deadly. He believes the king has less than honorable intentions for its use. Killian is inclined to believe Pan, but his brother has faith that their mission is for the greatest good.

In the present, Hook makes his way to the top of Dead Man's Peak where Pan is waiting for him with a deal. He'll be able to leave the island with Emma if he goes to work for him. To prove his loyalty, Pan wants Hook to kill David. This must happen before the Dream Shade does him in. Pan offers Hook some rum before disappearing. David makes his way up the peak. The two men continue on their journey. In the past, Liam tried to prove the king wouldn't lie by cutting himself with Dream Shade. The poison quickly takes effect. Killian is devastated.

In the present, David draws his sword on Hook. He overheard the conversation with plan. Hook reminds him that he never actually took the deal. He also says he made up the story about the sextant in order to get him to the top of the peak. It's the only way to save his life. In the past, Killian was able to save his brother after Pan told him that drinking from a powerful water spring can heal any ailment. But its magic comes with a price. Killian gives his brother the water which revives him to full health. The two of them take off in their ship to reveal what they know about the king. Unfortunately, when they land home, the poison from the Dream Shade reemerges to kill Liam.

In the present, the trap to catch a Lost Boy works flawlessly. Emma tries to convince the kid that Pan is a monster by pointing out the scar on his face. She's shocked to learn that Henry is the one who put it there. She lets Regina rip the Lost Boy's heart out. It's the only way to get him to do what they want. The Lost Boy returns to Pan's camp to tell Henry that his family is here. He hands over the small mirror Regina gave him as proof. Henry can see Emma, Regina and Mary Margaret inside it. His mother tells him that they are coming to get him. Operation Cobra Rescue is in effect.

Hook cuts through some Dream Shade to get water from the spring that will save David's life. Its power comes with a price. Once David drinks it, he cannot leave Neverland. He feels that's a small price to pay for saving his family. The men return to let the women know they didn't get the sextant. David plants a long kiss on Mary Margaret. He then tells everyone that Hook saved his life without telling the true story of what happened. He felt the pirate deserved credit for his good form. Hook shares a moment with Emma, who gives him a big kiss. She assures him it was a one-time thing.In the past, Killian buries his brother at sea. He takes over command of his ship. He burns the sail so no one can ever return to Neverland. He vows to not take orders from the king. He says they will take what they please and live under their own rules. They no longer sail as the Jewel of the Realm. For this day forth, their ship will be known as the Jolly Roger. From this day on, they will be pirates.

In the present, Pan tells Hook that he should have taken his deal. The kiss he shared with Emma didn't mean anything. Hook disagrees. Pan lets him know that Baelfire/Neal is still alive. The best part is that he's right there in Neverland. Pan will leave it up to Hook as to whether or not he shares this info with Emma. As for Neal, he's locked in a cage. Pan gives the order to hang it from a tree next to the other one. There's no way to see who else is being held captive in this jungle prison. 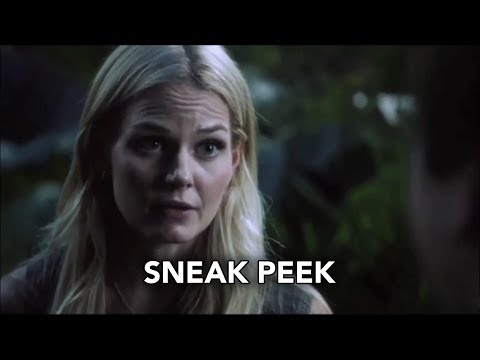 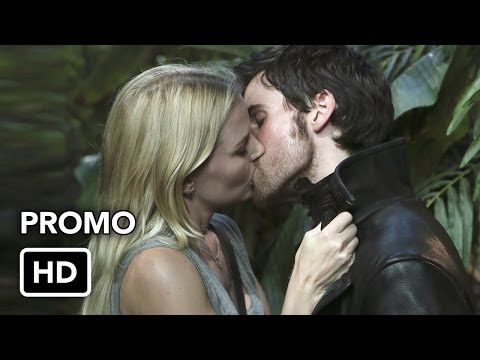