Our story begins in Fairy Tale Land as young Snow White's birthday approaches. Her mother, the beautiful Queen Eva, guides Snow White to her chambers to give her a special birthday present. Inside, they find one of their servants, Johanna, trying on a tiara that's meant for Snow. The young princess chides Johanna sharply until the Queen stops her, telling Snow that everyone is deserving of love and respect. As the lesson sinks in, the Queen collapses in a fit of coughing and is clearly unwell. A doctor is summoned and he quickly surmises that whatever has befallen the Queen, it's beyond his abilities to cure and that the King should be summoned back to the castle immediately. Snow White, desperate to find a way to save her mother, asks Johanna if there's anything she can do. Johanna tells Snow that The Blue Fairy may be able to provide a magic cure and Snow White heads out into the forest that very night in search of a magical cure for her mother.

In present day New York, Henry and Neal appear to be bonding quickly. What seems to still be taking some time is Henry forgiving Emma for lying to him all of this time about his father. It seems she and Mr. Gold both have sons who are angry with them. When the four of them return to Neal's apartment to get Henry's camera, Captain Hook suddenly attacks, plunging his hook deep into Mr. Gold's chest before Emma knocks him out cold. Gold quickly determines that the wound is poisoned and nothing in New York will cure him. He needs magic and that means getting back to Storybrooke as soon as possible, which means taking Hook's ship, The Jolly Roger. It's a good thing Neal seems to know a thing or two about sailing, which comes as a bit of a surprise to Emma. Neal's got one more surprise for her when she meets his fiance!

Back in Storybrooke, it's Mary Margaret's birthday, but she's refusing to celebrate. Even so, a gift is left for her. When she opens the box, she discovers the tiara from Fairy Tale Land and a note from Johanna. She goes out and finds her beloved friend and the two of them reconnect for the first time since The Curse brought them to Storybrooke. While visiting, Mary Margaret hears something in the woods nearby. She investigates and finds Regina and Cora digging, searching for Rumplestiltskin's dagger. She realizes just how bad things would get if Cora got the dagger, gaining control of The Dark One or potentially the means to take his powers for herself! Mary Margaret tells David and they contact Emma to get the location of the dagger.

Flashback to Fairy Tale Land where young Snow White is walking through the forest at night, searching for the right blue star to wish upon. As she's still finding her way, a voice calls out to her and The Blue Fairy appears, asking how she can help. Snow explains about her mother and asks for magic to cure her. The Fairy explains that death is part of life and to circumvent that would be to use dark magic, which always comes with a cost. The Fairy gives Snow a candle that, when lit, could heal the Queen, but must take someone else's life in return. The Fairy also instructs Snow never to tell anyone about this. But young Snow White can't bring herself to trade another life for her mother's and confesses everything to her mother. The Queen is so proud of her daughter, telling her that as long as she keeps good in her heart, they will always be together. Then, the Queen slips away, leaving Snow White alone. After the Queen's funeral, when everyone has left, The Blue Fairy appears once again, but suddenly is enveloped in familiar purple mist, transforming into Cora! Alone with the dead Queen, Cora explains how she poisoned Queen Eva and tried to tempt Snow White into doing something evil-a plan she won't so easily abandon.

In Storybrooke, David and Mary Margaret are inside the inner workings of the clock tower and take Rumplestiltskin's dagger from one of the hands of the clock. It seems like good has triumphed again when suddenly Cora and Regina appear, with a captive Johanna in tow. Regina promptly rips Johanna's heart from her chest and begins to squeeze. The deal is simple, Johanna's life for the dagger. As Cora explains, Snow finally figures out the truth-that Cora poisoned her mother and impersonated The Blue Fairy. Nevertheless, she can't let Johanna be killed and hands the dagger over. Regina puts Johanna's heart back, but as she walks back toward Snow, Cora magically thrusts Johanna through the clock face, sending her tumbling to the street below, killing her. Regina and Cora escape unscathed with the dagger, leaving Snow to grieve for another dead mother figure. At Johanna's grave, Snow begins to believe that being good has caused her and those she loves so much pain. She resolves finally to kill Cora. 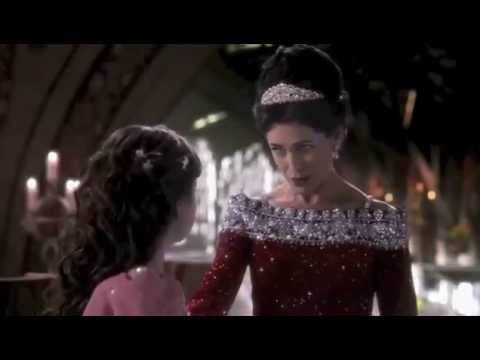