The SVU team sits in surveillance vans, staking out a downtown brothel, while Carisi poses as a john inside. He's been waiting for his date for a while, but one of the madams, Martha, assures him a delivery of young girls is on the way. Just then a minivan arrives and scantily clad girls climb out, led by a woman SVU knows well: Selena Cruz, the trafficker Benson reunited with her son in the Season 16 premiere. Looks like she's back to her old tricks...

SVU busts the brothel, including Selena, Carisi and Martha, taking everyone into the station. Martha pulls Benson aside and tells her she's undercover - she's not with any agency, but the ring has her daughter Ariel, who was kidnapped three years ago. Benson is skeptical, so Martha takes her to her apartment, where the walls are covered in a compilation of photos, newspaper clippings, maps and scrawls detailing Martha's hunt for her missing daughter. Ariel was supposed to be in the delivery of girls that night, but Ariel's pimp, Timmer, held back two girls for disciplining. Despite Martha's story, Barba still wants to prosecute her. Martha pleads with Barba that she's not a criminal. She's personally bought and sent home half a dozen girls saving them from the sex trade. She was going to buy Ariel that night. Benson and Barba promise they'll do their best to find Ariel, but they're going to need Martha's cooperation.

The detectives try to get the other prostitutes to give them info on Ariel, but nobody will talk, including Selena - not even when Amaro informs her Child Services took her son. Later, Selena has a change of heart and wants to see her son again. She gives SVU the address of a party house in Queens, which Martha recognizes. She knows the madam, Tracy. SVU stakes out the place and sees Timmer bringing in three girls, but no Ariel. When Timmer leaves, the detectives spot a beer delivery truck and bust the driver, Tommy, for illegal distribution of alcohol to a residence.

Super Bowl Sunday is the next day, and there's sure to be a big party at the Queens house. Tommy informs them it's a high-class event featuring the best girls and the richest clients. The detectives decide to take advantage of this, putting surveillance on the house while Amaro takes Tommy's truck and poses as the beer delivery guy. As soon as he's inside, the rest of the team bursts in and takes over the house. Benson explains to Tracy that she needs to go along with the party as planned, and when SVU makes the bust, she'll have to pretend she's busted, too - and she better make it look good. Benson then shows Tracy Ariel's photo and demands she make a special request for her. Looks like the detectives are going undercover...

The next day, the party goes on as scheduled, with Benson decked out in her finest madam-wear, posing as Tracy's sister-in-law, Carisi playing a rich john and Fin as a pimp. From the surveillance van outside, Martha is starting to worry - she doesn't see Ariel anywhere. Inside, Carisi starts to get agitated - where's his sexy ice bunny?! Just then, a car pulls up and a mystery pimp steps out. Tracy says it's The Bishop, but he's alone - Timmer must have called him looking for Ariel. This can't be good.

The Bishop storms in, yelling for Timmer to explain who Benson and Fin are. When Benson turns around to answer, she's shocked to see The Bishop is none other than Declan Murphy, SVU's former chief, now deep undercover. When Carisi, who doesn't know who Murphy is, starts mouthing off, The Bishop pistol-whips him in the head, knocking him down. Suddenly, Benson pulls out her gun, points it at Murphy and tells him to drop the gun. After a short standoff, the rest of the SVU squad bursts in the door and busts the whole party, including Benson, Fin and Carisi.

Back at the station, Murphy blows up at Benson and Fin for ruining his undercover mission. Benson explains to him they're looking for Ariel, but he has bigger priorities, specifically taking down a major trafficker, Johnny D. He does admit he knows Ariel, but she's damaged goods since Timmer beat her up before selling her to Johnny D. He doesn't know where Johnny D. keeps his girls and refuses to jeopardize his cover by asking to buy Ariel from him. It's too late for Ariel - she's too broken.

Rollins tries talking to one of the girls, Nina, whom Martha says knows Ariel. Nina is terrified but admits Martha was supposed to buy her and Ariel until Timmer walked in on Ariel on the phone with her and beat her till she blacked out. Nina won't say anything else - she doesn't want to end up like Ariel. Martha watches the interrogation, devastated that she almost got her daughter killed.

Rollins and Fin then tackle Timmer, bluffing that they've been onto him for a year, embedding Selena and Martha just to get to him. But they're going to release him and The Bishop because they didn't have a search warrant. That doesn’t mean Timmer's in the clear, though, because both The Bishop and Johnny D. think Timmer set them up and they'll surely be out for blood. Timmer's a dead man... unless he helps SVU find Ariel...

SVU and ESU storm a shady converted space, finding a number of half-naked battered women chained to the walls, surrounded by syringes and drugs. After pushing through various rooms, they find Johnny D. using Ariel as a shield, a piece of glass held to her neck. Benson takes him down and rescues Ariel, who is finally reunited with her mother. Back at the station, Murphy congratulates the team for nabbing Johnny D., but warns them not to turn their backs on him. He's trafficked girls for 20 years and has never been arrested. Rollins asks if, now that Johnny is facing life in prison, Murphy can return to normal life, but it's not that easy. Johnny D. was the kingpin, and The Bishop is heir apparent.

That night, Benson is home reading to Noah when the doorbell rings. It's M.E. Melinda Warner with some big news - off-the-book news. She ran Johnny D.'s DNA when it wentthrough the system and found a familial match in an unrelated case. He never needs toknow, but Benson does. Johnny D. is Noah's father. 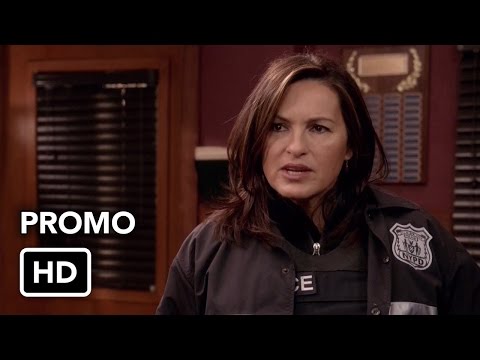