Fin, Carisi and Rollins are spending their weekend at a video game expo, checking out new video games amidst crowds of gaming fans. As they make their way through the booths, the men explaining gamer lingo to a clueless Rollins, they come across Leslie Connolly, the male nanny from the GlagowMan case who created a video game from his drawings. What the detectives fail to notice is two guys verbally harassing a female gamer named Sarah manning the booth for the Amazonian Warriors: Protectors of the Rainforest game. The guys have a problem with Sarah's boss, Raina Punjabi, who created the "feminazi" game, but she tells them to get lost. She then excuses herself to run to the bathroom, but when she comes out of the stall, the guys push her back in and assault her. She fights them off and they run.

A bloodied and bruised Sarah gives a full report at the station, blaming the gamers' misogyny for the attack. Amazonian Warriors isn't popular with guys who like shoot-'em-up video games like Kill or Be Slaughtered, because, as she puts it, Warriors is "non-violent and non-stupid." The game launches in a few days, and the haters have been getting more aggressive online, accusing Raina of sleeping her way into the business by getting engaged to Steven Kaplan, a wealthy businessman.

Rollins and Fin meet with Raina and Steven, but Raina is too worried about her product launch in two days to give them much information. She does admit that she gets cyber threats all the time, but they don’t intimidate her anymore. Back at the station, however, the detectives get some intel from an unlikely source: Leslie Connolly. He tells SVU that while skimming online gamer forums, he came across a thread discussing the attack on Sarah. One message appeared to be from one of the attackers himself, bragging about the assault. Leslie messages the guy, pretending to want to meet up and continue to harass Sarah. The plan works and when the guys show up to meet Leslie, an undercover Carisi arrests them and Sarah IDs them in a lineup. Case closed, right?

Not so much. Later that night, while Raina is in the middle of a webcam interview about her game, a SWAT team storms her apartment, tearing through her home and aiming a gun at her head - all on camera. When Fin and Rollins get to the scene, they learn ESU got multiple 911 calls claiming there was a hostage crisis and Raina was holding kids and weapons in her apartment. Raina's unfazed but Steven's upset - Raina was sent a threatening message earlier that day, and then got doxxed, meaning her personal information, including her address, was posted online.

And the threats continue, including one warning Raina that if she goes through with the Amazonian Warriors launch, she will be raped, mutilated and murdered. Despite the threats against her and her company, Raina refuses to postpone the launch, especially since her swatting went viral and she's become "the face of women in gaming." She tells SVU that while she appreciates the warning, she is refusing police presence at her launch, but the detectives decide to keep an eye on the event anyway, as discreetly as possible.

At the launch, Raina takes the stage, introducing herself and her game, but before she can continue her presentation, red dots start appearing on her face and body. Several audience members are shining laser pointers at her. Benson and Fin kick them out of the auditorium, but just as Raina begins again, the lights go out and smoke bombs go off. The audience freaks out, running for the exits, and in the melee, Raina is lost.

Her mic, however, is still on, and the detectives can hear her being led to safety by a security guard. But when Carisi checks out the security monitor, he sees the security guard attacking Raina in the stairwell, carrying her out the back exit. Carisi races out to the alley and tackles the fake guard. But where is Raina? Suddenly, a Jumbotron outside the convention center switches to a live feed of Raina being bound and gagged inside a van. A masked man announces "Game on, NYPD." The kid Carisi tackled claims he has no idea who his accomplices were - he was just told to bring her down the back stairs so they could "prank" her on the street. He had no idea they were going to throw her in a van and kidnap her.

SVU tracks the van down to outside an abandoned warehouse, where they find a Kill or Be Slaughtered logo, and evidence that Raina was held there. The kidnappers also left a video of Reina being slapped around with the message: Level Completed. Back at the station, Carisi finds another video: a livestream of the three kidnappers taking turns with Raina. Bound and bloodied, Raina is forced to give a message, admitting gaming is no place for women, and all the other "bitches" in the industry aren't safe and aren't wanted. The kidnappers also make her say she never loved Steven and only married him so he'd back her game.

While watching the video, Rollins realizes the upload is geotagged to the home of Mrs. Marisa Rossi in Staten Island. The kidnappers have been using the dark net the whole time, but now they start to leave a trail? It must be a trap. This whole thing is a game to them and NYPD has to play along. At the Rossi home, the detectives find a bewildered art teacher who just got home, but who has a college-age son who plays video games in her basement. Rollins, Fin and Carisi search the basement - it's definitely where the kidnappers videotaped and raped Raina - but their guns are missing from the gun safe.

Just then, Rollins gets a call from Raina, saying she stole one of the kidnapper's phones and they're holding her in a parking garage. She begs Rollins to come save her - she thinks they're going to kill her. What Rollins doesn't know is that the kidnappers have a gun to Raina's head during the call - they've orchestrated the whole thing. Luckily, Fin is on to them and warns that this sounds like the final level of Kill or Be Slaughtered, where they call the cops only to ambush them when they show up.

At the garage, SVU and the SWAT team finds Raina tied up and duct taped to a rifle aimed at the door. They search the place and find two of the perps on the roof, shooting at them. One of them, Anthony Rossi, claims the other two, Ryan and Pierce, are totally out of control and he geotagged the video to his mom's house so the cops would find them. As Rollins cuffs Anthony, Carisi pushes on, and when he emerges around a corner, Pierce takes a shot at him. Luckily he misses and recoils from the gun - and from Carisi shooting him in the shoulder. Carisi moves in, kicks Pierce's gun away and pulls out his cuffs.

"Recoil. Not like shooting in a video game," Carisi scoffs.

"Actually, it's exactly the same."

Carisi turns around to find Ryan with a gun pointed at his head, telling him to "prepare to be slaughtered." Rollins comes up from behind, but Ryan sees her and tells her to drop the gun. It's not looking good for either Carisi or Rollins, until, out of nowhere, Fin surprises Ryan from behind. He tells him to drop the gun or he'll blow his head off, but the gunman refuses. Just as he turns around to shoot Fin, Fin shoots him three times. Dead.

The next day, Rollins goes to visit Raina to see how she's holding up.

"Women in gaming, what did I expect?" she asks, tearfully, telling Rollins she's quitting.

"You said if you gave up, they'd win," presses Rollins. 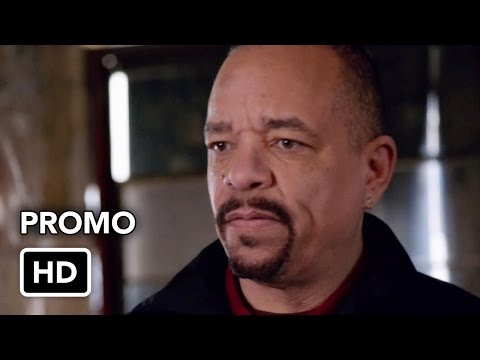