In the early morning hours, as Annie Li opens up the restaurant where she works, a man wearing medical gloves suddenly grabs her from behind and pushes her inside. He hums church music then puts her out. When she comes to, he says, "Nice to see you again. Maybe we'll have tea soon," then he walks down the street, dumping his gloves along the way. As Annie recounts her attack to Fin and Benson, the detectives realize they're looking at a pro: he stalked his victim and knew how to knock her out. He's going to keep assaulting women until he's caught.

Back at the station, Rollins puts the M.O. through ViCap: Caucasian male, early morning, choke hold, latex gloves, hummed... That's when she has a realization - she dealt with a similar rapist back in Atlanta who hummed gospel music. She checks with her old precinct and learns there are three open cases in Atlanta with the same M.O. They did rape kits but never had them tested. Benson sends Rollins and Fin down to see if the Atlanta rapes could be connected to the New York ones.

Meanwhile, there's been another assault. A 16-year-old was attacked that morning by a guy who choked her out. She was moving her mom's car when the guy grabbed her. When she came to behind a dumpster, he told her to go move her mom's car so she wouldn’t get a ticket. He'd been stalking her.

Back at the precinct, Counselor Trevor Langan approaches Benson to let her know Child Services wants a hearing on Noah. Even though Benson reported his rib fractures and evident abuse, Noah's social worker wants a follow up. Just what Olivia needs when there's a serial killer on the loose.

In Atlanta, Fin and Rollins wade through a huge mess of disorganized files in the evidence warehouse. Rollins' old boss, Captain Reynolds, isn't much help either. A rape test costs $1,200, he says, and he's not wasting that money on the false claims of a prostitute, a junkie and a teenage mother. He doesn't believe they were raped, after all, "they're not exactly virgins." That night, after hours of fruitless hunting, Chief Patton stops by the warehouse to taunt Rollins. They can't find the files because he's already pulled the files - they've been waiting in his office for her. Patton says he'll rush the rape kits, but it's clear there's some bad blood between these two.

Frustrated, Fin and Rollins interview Ashley Miller, one of the Atlanta rape victims. She says the police never believed her and thought she was making the whole thing up. They didn't even both adding something she said to their report: that her attacker carried a pager. On their way out, Fin and Rollins get a call - all of the DNA from the Atlanta rapes is from the same guy.

Back in New York City, the squad briefs Chief Dodds on the series of rapes, which they've named Pattern Seventeen. Three more rapes in Vegas also fit the pattern. Dodds gives Benson a deadline: she has to present at the CompStat briefing the next day and she better have some progress to report by then. At the panel, Benson gets grilled pretty hard and is admonished for her team's lack of headway. She tries to explain it's due to the backlog in processing rape kits in other states, but the panel tells her she's blaming everyone but herself. Suddenly the meeting is cut short - the Pattern Seventeen Rapist has struck again.

Twelve-year-old Ryan Catalano was walking her puppy early in the morning when a man wearing gloves and humming shoved her into his car and tried to choke her. Ryan's dog, Max, bit him and scared him off before he could rape her, and she left her headphones in the backseat to prove she was there. Based on her description of the car and license plate, Carisi finds a possible match: Dr. Joseph Conklin, a doctor at Mercy Hospital. The DEA has an open file on him for pushing pills, which allows SVU to get a warrant to search his car. There, they find a ton of pills, as well as Ryan's headphones. Did SVU find their serial rapist?

Perhaps not. None of the victims recognize Conklin in a lineup and his blood type isn't a match, though someone definitely used his car to attack Ryan. The detectives check with the hospital parking lot attendant and find that hospital EMTs keep their ambulances in the lot and have access to all the car keys. Security footage shows Albert Beck, an EMT with no record, driving the doctor's car. Turns out, Beck was an EMT in Atlanta from 2007-2009, and in Milwaukee the next two years. Then he moved to NYC, where he lived for four years without incident... until recently.

Meanwhile, Olivia sits in Family Court, watching Chantal, Noah's social worker, criticize her parenting skills on the stand. She raises issue with the fact that when Noah was in the hospital for lung issues, Olivia split her time between his bedside and the precinct, where she was trying to solve a serial rapist case. Chantal is concerned that as a single mother in a high-stress job, Olivia can't make Noah her first priority.

At Beck's apartment, Fin and Carisi meet his girlfriend, Laura Burns, who says she threw Albert out a month earlier for "trading up" to her 15-year-old daughter, Beth. Beth walks in and defends Albert, yelling at her mother that it's her fault he left. The detectives learn that Laura and Albert started living together in Milwaukee around the times the Wisconsin rapes stopped. They then moved to New York with her daughter, and the rapes only began again after she kicked him out. Beth still refuses to believe Albert could have done anything wrong, but when they threaten her with jail time for sending him underage pornographic photos of herself, she agrees to cooperate.

That night, SVU sets up a sting for Albert to meet Beth in the park. But when he approaches her, she tells him to run, which he does, though he doesn't get far. It's not looking good for Albert. The DNA from Ryan's dog is a match and he's up for five rapes, one attempted rape and possession of child pornography. He's likely guilty of the Vegas and Milwaukee rapes, but they still haven't bothered to test the kits. The only way to get Albert for those is to have him confess...

"Your rap sheet in prison, that's your reputation," Carisi threatens.

The next morning, Olivia has two important meetings: one is another CompStat panel, and the other is a meeting with the Family Court Judge Linden. Linden tells Liv she likes her a lot and is on her side, but if she took on more than she can handle, there's no shame in giving up Noah. Just then, Dodds calls Benson, but she ignores him to tearfully tell Linden that Noah - not her job - is her top priority. Benson then races to the CompStat meeting, where she witnesses something truly surprising: Dodds backs her up! The Chief defends Benson in front of the whole panel, saying the reason for the delay in solving the Pattern Seventeen case was due to the national rape kit backlog, a serious issue that must be dealt with.

That night, Rollins calls up Patton to tell the Atlanta precinct the good news. While eyeing a female employee's figure, Patton informs Rollins that he'll be in town in January and wants to get a drink with her. He won't take no for an answer. 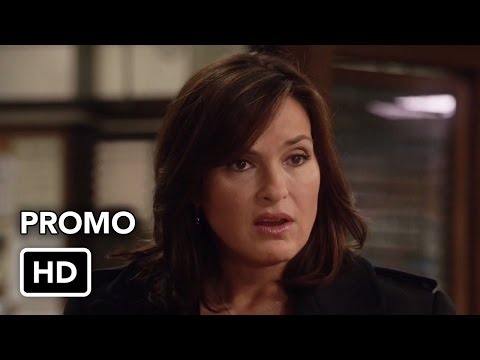