Rollins ends a shift at SVU and, looking to pay off a new $15,000 debt, sneaks out to an underground gambling club. Unfortunately for her, she makes eyes with an acquaintance: Clare, a rape victim from a few weeks back who's now doling out drinks to backroom gamblers. Clare tells her superiors - a hard-nosed Irishman named Declan and his pregnant boss, Sondra - that Rollins is a cop. Declan pulls Rollins into a private room and tears off her shirt in search of a wire. When Rollins explains she's not on official business, he blackmails her - they need to flip a juror and want her to tail the juror for an address.

While on the clock at SVU, Rollins slides out to track the juror, but can't bring herself to fulfill the task, thinking it could lead to someone getting hurt. Turns out Declan sent someone to follow her and he threatens to call Benson about the debt. Rollins pleads with him to reconsider and makes the only offer she has left: sex. Declan agrees on one condition: that he film it. Afterwards, she chats with Sondra and the two strike a deal for Rollins to work off the 15 grand she owes, with the understanding that Rollins will not have to repeat her favor to Declan.

This new bargain results in Rollins taking a "sick" day, another in a slew of clues that worried comrades Fin and Amaro bring to Benson. When Amaro divulges he even tracked Rollins' phone to confirm her lie, Benson stops him right there. Is something going on between him and Rollins? Amaro denies it, but Benson lets him know Maria talked to her, so she knows he and his wife aren't "working it out" like he claims.

Rollins' first assignment on gambling club detail involves driving a drunk diplomat back to his house. His wife chastises Rollins at the door, but the real surprise hits later when she encounters Fin at a bar. He knows she's in trouble and gives her a stack of cash in hopes that paying off her debt will allow a clean break. When he leaves, Declan approaches from another table. The cash is a good start. Now he needs her to make a gun disappear from evidence to clear one of their thugs, Carlos. Somehow she manages to succeed.

Fresh off her latest crime, Rollins returns to SVU and joins the team on a rape call - to the same mansion where she dropped off the diplomat. His wife was raped by an intruder, and all signs, including DNA, point to Carlos. When the diplomat and his wife see Rollins, they interpret her presence as a message from the club and both change their stories, terrified of more retribution. A devastated Rollins confronts Declan and Sondra, with the latter shrugging off Rollins' fear that if SVU catches Carlos it will lead right to Rollins. Sondra insists Rollins find a way to make it disappear.

Amaro adds to Rollins' problems when he runs a check on Carlos' record and stumbles on surveillance footage of Rollins in disguise checking out the gun from evidence. He and Fin approach Benson and she decides to put an end to the charade. She demands Rollins turn herself in to Internal Affairs the next morning, but instead, Rollins takes drastic measures and kidnaps Sondra, threatening to kill her baby unless she receives money and a jet out of town from the financier of the whole operation, a big shot art dealer. Before any deal happens, Declan surprises the room by outing himself as NYPD and arresting the whole lot.

Or maybe it's not a surprise - turns out Rollins never had sex with Declan and the video was proof that from that point forward, she would answer to him en route to nailing the whole gambling operation. She successfully connected Sondra to the art dealer, something he'd been trying to do for years. With the help of Declan, Rollins keeps her badge, but loses something bigger - respect. Not only does Fin take offense that she kept the undercover gig a secret from him, but Benson flat out states that she no longer trusts Rollins. Benson reminds her that a rape occurred during this whole debacle and if SVU weren't already shorthanded, she would transfer Rollins out.

Raw and emotional, Rollins exits Benson's office to the judgmental gaze of Amaro and Fin. Can she ever win them back? 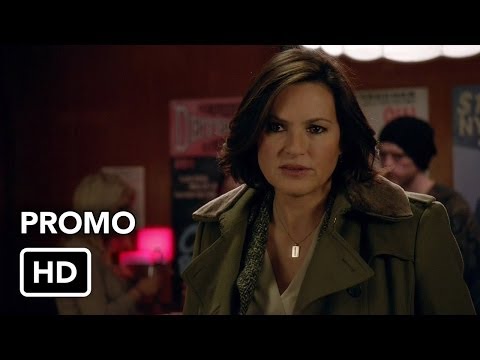