SVU attends a private celebration where Cragen announces Benson's new promotion to sergeant. Despite previous concerns, she will still be allowed to supervise SVU - a relief for everyone. Amaro and Rollins, both tipsy, walk back together in good spirits - until a hot pursuit interrupts them, and an officer gets hit by a cab. Amaro takes charge and ends up in a standoff with the suspect in a hallway. After bullets fly and young Officer McKenna gets hit, Amaro returns fire blindly - only to find a wounded teen on the other side and no evidence of a gun.

Without the weapon, Amaro's shooting spurs controversy and ignites a media circus. Reverend Curtis Scott appears as the wounded teen's advocate and IAB usurps the investigation, both intent on smearing Amaro as the prime example of NYPD excessive force. Leading the IAB charge (against his will) is none other than Cassidy, positioned to test his mettle in exchange for a spot in the department.

Cassidy interviews all the detectives, and it becomes clear IAB wants a trial, even though Amaro followed protocol. But when an edited cellphone video from the incident paints Amaro in a bad light and his blood alcohol content suggests impairment, he smells a setup brewing. IAB demands he turn in his badge with the latest news - Officer McKenna was hit by a ricocheted bullet from her own gun. In other words, there's no missing gun; Amaro shot an unarmed teen.

The judge at the hearing sets his bail impossibly high, forcing Amaro to leverage his house to stay out of jail. While SVU checks out a lead on the victim's brother, Benson visits Amaro at home. As they discuss how he's getting railroaded in the press, gunshots rip through his window, almost hitting his daughter. Infuriated, Amaro charges outside with a baseball bat - two teens in the street goad him on, assured of his role as a dirty cop. Benson keeps Amaro at bay, and when the dust settles, he agrees to crash on her couch. The event triggers Amaro's wife to demand sole custody of their daughter, and as if it couldn't get any worse, Munch advices him to take the plea rather than risk a political battle.

Coupled with Cragen's warning that the NYPD may make him the fallguy, Amaro decides to plea and serve a year's probation. The D.A. rejects the deal and pushes for a hate crime felony, a move that incites Amaro enough to renege on the offer and force a grand jury trial. The D.A. proceeds to skewer Amaro on the stand, and his fate appears sealed - until a juror volunteers a line of questioning the leads the detective to level with the jury. In a teary-eyed address, Amaro defends his actions but not the result, clarifying that no amount of protocol justifies an innocent teen being shot. In a tight decision, the jury sides with Amaro. He's free to return to SVU.

Back at the station, Cragen informs Amaro he's on desk duty and must undergo anger management training, and then makes an announcement of his own - he's officially retiring from SVU! He says his goodbyes to each detective and identifies his replacement: Benson. In a private moment, he shares one last piece of advice to the new captain: don't let SVU take over your life. Benson gets emotional as Cragen exits his office for the last time, turning over the keys to SVU's new leader. 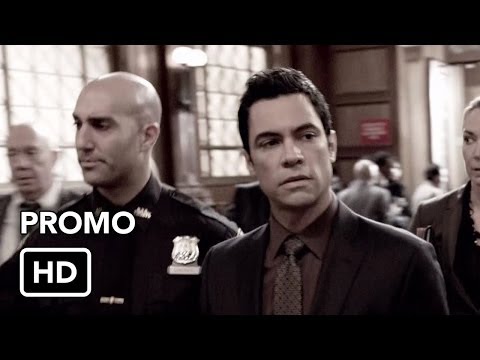