As New York City prepares for the holiday season, a Christmas party is underway at a church. Outside, a little girl, Sophia, runs to catch her priest to deliver a Christmas card before he leaves. She gets in the priest's car and delivers the card, but the moment is interrupted when some hooligans smash the priest's car window. Sophia runs away. The priest is not so lucky, and the hooligans take turns beating him up.

When the police arrive on the scene, they find a beaten and bloodied man who claims to have been attempting to rescue the priest from muggers. Bystanders accuse the man of trying to mug the priest and steal the presents for himself, but the man denies the allegations. Before he's arrested, the man tells the officers that Fin is his brother-in-law.

Fin and Rollins meet with Fin's ex-brother-in-law, Sam, who claims that he was rescuing the priest from attackers before the bystanders found them. Fin has trouble believing Sam, who is adamant that he was playing the Good Samaritan. The priest is still unconscious, so Fin and Rollins decide to track down the only witness: young Sophia.

Fin, Rollins, Benson and Amaro head to the scene of the crime. Inside the priest's car, they find Sophia's Christmas card. Fin is still reluctant to believe Sam's story, but Benson spots a CCTV camera nearby that may provide some clues. The camera didn't catch the assault, but the detectives see the priest, Sophia and two unidentified men approaching the car. Sam's story seems to be checking out.

Benson and Rollins try to get Sam out of jail before Christmas, while Fin and Amaro head to the hospital to speak to the priest, who has just woken up. The priest, Father Shea, tells Fin that Sam saved him from two unidentified muggers. He provides information about Sophia, the girl who visited him in his car. The detectives head out to find Sophia. Unfortunately, Sam's judge decides to keep him in jail over Christmas.

Sophia tells Benson and Amaro what she saw the night Father Shea was attacked. She says two Spanish-speaking men attacked the priest and Sam tried to save him. Meanwhile, Fin and Amaro meet with M.E. Warner, who found fingerprints on Father Shea's car. Fin and Benson track down Adam Benitez, who is working as a Salvation Army Santa. Benitez tries to run, but Benson tackles him on the street.

In the interrogation room, Benitez says that he and a friend saw Father Shea hugging a girl in his car, but the assault was his friend's idea. Eventually, Benitez gives up his friend's name: Enrique Rodriguez. When Fin and Rollins make an arrest, Rodriguez expresses resentment at the police for arresting him instead of a pedophile priest.

Benson and Amaro return to the hospital to find Father Shea speaking with his superior, who has just given him a plane ticket out of the country. It's suspicious, to say the least. The detectives decide to get recorded statements from all of their suspects and witnesses in order to ensure that Sam will be released before Christmas.

Later, Benson and Amaro interrogate Enrique Rodriguez, who wants to tell them about how Father Shea molested his sister 10 years prior. Enrique claims that Father Shea impregnated his sister when she was 13, then forced her to have an abortion. Benson says that they'll need Enrique's sister, Angelica, to corroborate his story. Enrique says that his sister is a mess, but they should ask Father Shea about it.

Meanwhile, the ADA tells Fin that he refuses to release Sam before Christmas. He says he'll need Father Shea to identify the attackers before he can release Sam. Father Shea reluctantly agrees to participate in a line-up, and immediately he identifies Enrique as his assailant. Benson questions Father Shea about Angelica, but Shea denies the allegations.

Fin and Rollins track down Enrique's sister, Angelica, to question her about her involvement with Father Shea 10 years prior. Angelica explains that Father Shea didn't molest her. Instead, Father Shea helped Angelica after someone else molested her. Unfortunately, Father Shea refuses to tell the detectives who is responsible.

The detectives return to the home of Sophia. They discover from Sophia's mother that Father Shea is Sophia's biological father. Later, Father Shea tells Benson and Amaro that his fellow priest had been assaulting girls. Amaro explains that Father Shea has been harboring a criminal for the past 10 years.

Angelica visits Enrique in jail to inform him that Father Shea was not the culprit and that he beat up the wrong priest. Enrique feels remorse for his mistake, but unfortunately, he can't go free just because he beat up the wrong priest. Fin rushes to the judge's house to ask for a conditional release for Sam, so that he can spend Christmas with his son. The judge agrees to sign the papers, and Fin takes Sam home.

Amaro convinces Benson to take off early for vacation while he heads back to the church to arrest the priest who Father Shea had been covering for. While Benson is on a plane to the Bahamas with a mystery man, Amaro calls to inform her that he's arresting the priest. Before he can make an arrest, though, Angelica shoots and kills the priest who assaulted her 10 years earlier. 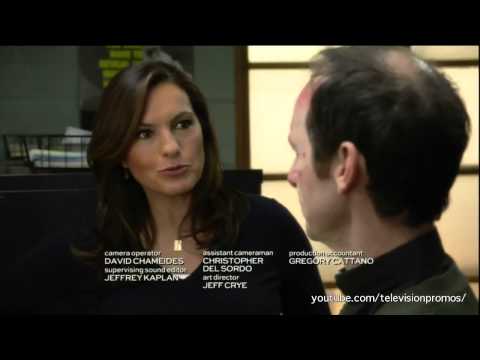