Ken, Fin's son, reveals to Munch that he's engaged to Alejandro, his partner whom Fin has yet to meet. Though Munch insists Fin is proud of his son, Ken and Alejandro are hesitant to disclose their upcoming marriage to him. The three separate outside the restaurant to Alejandro's detriment: as he turns the street corner, anonymous men throw a hood over his head and stuff Alejandro into a black van.

The next day, Alejandro reveals what little he remembers about his ordeal to Amaro. All he knows is he was beaten and sodomized, and his assailants spoke a Dominican form of Spanglish. Most importantly, they knew his name, which means they likely knew him. A hate crime with a similar M.O. was reported two weeks earlier. The SVU unit narrows the search to a Dominican gang called BX9, a gang his cousin's boyfriend is involved in.

Without much trouble, the SVU unit locates and questions the pregnant cousin Marisol and her boyfriend Cesar. To avoid sending his pregnant girlfriend to jail, Cesar confesses and IDs Alejandro's three other attackers. The case seems neatly wrapped - until another man is attacked.

When the third victim, Rick Simms, refuses to press charges, the SVU unit follows up with his recently separated wife to dig into why he was beaten. According to his wife, Simms quit his Wall Street job three years ago to pursue teaching, but he quit his job three weeks ago. Tired of his inability to pick a career and stay with it, Simms' wife left him.

Benson is suspicious of Simms' recent resignation, so she and Amaro question his boss, headmaster George Overby. He refuses to give the details of Simms' departure, even though Simms' supervisor Joanne Patchett clearly wants to talk. The detectives talk with one of Simms' former colleagues, Natalie Clark, about why he might have quit. Natalie reveals Simms was anonymously accused of abusing a student.

Rollins and Fin interrogate Ray Gambardelli, a father who owns a produce distribution company. The dark vans are a dead giveaway and with little questioning, Ray admits he beat Simms - and he would do it again. He didn't want his son humiliated by an investigation.

Benson and Amaro talk to Ray's son, Luca. He tells them that Mr. Simms kept him after school regarding his grades, but then proceeded to ask Luca for a hand job. When Luca refused, Mr. Simms touched himself. The detectives have heard enough and arrest Simms for sexual assault. Simms however adamantly denies the charges, seemingly genuinely blindsided by the information.

To double-check Luca's story, Benson and Amaro squeeze corroborating details out of the headmaster. Luca disclosed the assault to Natalie first, who confirms Luca's story. However, Simms' supervisor Joanne misspeaks and reveals discrepancies in the story. Clearly, she is extremely uncomfortable with the situation. Realizing the case may not be as cut and dry as they thought, Benson and Amaro re-question Luca. He can't remember any details about the assault or Simms' body - Luca is obviously lying, but the detectives don't know the motivation.

Knowing his lie is uncovered, Luca arrives at the station to tell the real story. Simms wasn't his attacker; it was Joanne. In intimate detail, Luca describes Joanne's house and body markings. The SVU unit storms Joanne's house armed with a warrant to discover all of Luca's descriptions are accurate. Joanne is bewildered at the accusation since she claims Luca has never been to her house. Overcome by emotion, Joanne faints during questioning.

Under questioning, Joanne explains that she left another school after a female instructor got married; the experience made her emotionally unstable, and she felt she could no longer work there. Benson and Rollins surmise Joanne is a closet lesbian. Suddenly, Benson receives a text: Joanne once attempted suicide by drowning.

Concerned for Joanne's well-being, Benson visits her to learn the truth about Luca's abuse. The only person who had been in Joanne's room is Natalie, who must've divulged the specific details to Luca. Joanne saw Natalie and Luca together in the library; Natalie promised to end the affair, but didn't. Next thing Joanne knows, Luca accused Simms of sexual abuse. When that plan fell apart, they pinned the blame on Joanne. Naturally, Natalie denies Joanne's allegations, saying how bad she feels for an obviously disturbed woman.

Luca's testimony is suspect since he's lied multiple times, but it doesn't matter in the end. Dropping off the deep end, Luca locks Natalie and himself in the biology room. Amaro intervenes, talking Luca out of killing himself, but he's too late to save Natalie. Luca confesses that when he suggested to Natalie they run away together, she laughed at him. Hurt beyond repair, Luca slit her throat. Sadly, the SVU unit knows he'll be tried as an adult and thrown into jail for years. 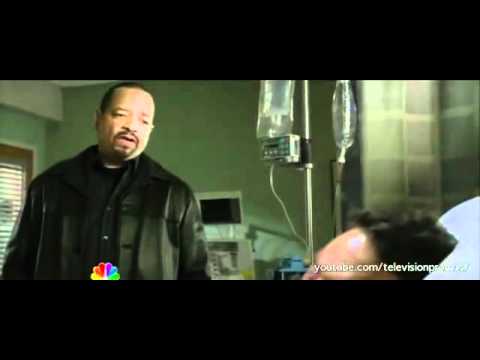