A 911 operator receives a surprising call from a young toddler. He tells her that his mommy is asleep on the ground and won't wake up. The operator tries to get more information from him and where he is, but he doesn't seem to understand what she's talking about. The operator is able to trace the toddler to his apartment where Benson and Amaro enter to find Sam, the toddler, and his mother collapsed on the floor. "Mommy, wake up, the police are here!" Sam says as he shakes his mother to no response. Sam tells Benson that his sister and mom were fighting about a "bad man."

Benson and Amaro are at the hospital where Sam's father arrives to pick him up. As of now, his 16-year-old daughter Kate seems to have disappeared and SVU starts investigating if she was abducted or just ran away. Fin and Rollins interview a friend of Kate's who says she's been at the library trying to rebound from a recent decline of grades and behavior. Finn and Rollins head to the library and find she has checked out books about children born through sperm donation.

Benson and Amaro talk to Munch about Kate's disappearance when Dr. George Huang visits his SVU friends. "What do you know about the psychology of donor children?" Benson asks Dr. Huang. He tells them it's not uncommon for children of that ilk to seek out siblings or the actual "father" of the donated material. "Girl searching for her roots, that can cause some tension," Dr. Huang advises as the possible cause of Kate and her mother's fight. Amaro and Benson interview the mother, Grace, who wakes up from her drunken stumble and learn Kate was conceived with donor sperm, and she tracked down the actual donor. Grace didn't want Kate to meet the man, but Kate refused to listen and left.

Finn and Rollins are able to track Kate down to a coffee shop because of a credit card purchase and bring the reluctant teenager back to the station. Kate tells Benson and Rollins that she wasn't kidnapped and refuses to tell them about her donor father. "They lied to me, my whole life!" Kate angrily tells them about her parents. The squad watches footage of Kate meeting with her unknown father. Benson thinks the father might be a pro pulling a con; he was purposely able to keep his face away from facing the camera. "I want to know what's his agenda; I thought the whole point of sperm donation was fire and forget," Fin says. Rollins mentions that on a child donor website that Kate was on, she found four other possible girls who are talking about the same specific donor; their mystery man suddenly has an urgent need to meet his potential offspring.

Knowing that the donation bank won't reveal the sperm donor's information, Rollins and Benson pose as a lesbian couple hoping to have a child with sperm from donor 141. The doctor tells them that they unfortunately ran out of donor 141 several years ago - "he was very popular," but she shows them his profile. Later, Amaro meets with a teenager named Ashley who happily met with donor 141 through a donor connection website thinking that he was her father. They met in NYC when her theater troop was visiting and had the best time with him. Then Ashley's baby starts crying in the room next door. Amaro and Finn think it's more than a coincidence that Ashley had a baby a short time after meeting her supposed father.

"So we are saying a donor father had a child with his biological daughter?" Munch asks the squad as they regroup and rethink the case. Dr. Huang says it could be GSA, genetic sexual attraction, a condition where children who are separated from their parent or siblings at an early age then find a sexual attraction occurs when they're reunited with them later on. Rollins finds a Dr. Colin Barnes that matches the description from the file they got from the donor bank and the details Ashley described about the man posing as her biological father. "Looks like we need to pay this doctor a house call," Benson says.

Benson and Amaro meet with an egotistical Dr. Colin Barnes, his wife Anne Barnes and his teenage daughter. They ask him about his relationships with his offspring that came through sperm donation, but he denies ever having contact or wanting contact with any of them. "Somebody is trying to extort money," Colin says as he tells them he's completely in the dark about this whole bizarre situation. Benson puts Colin through a line-up, but Ashley and the other daughters deny that he was the person they met claiming to be their father.

Benson and Amaro talk to Kate and the other girls and tell them the truth about donor 141; "the man that you met is not your biological father." They are all in shock that they were so easily manipulated; he seemed so genuine and even danced with them like fathers do with their daughters. The detectives regroup and try to figure out who could be posing as the biological father to all those girls and why. "Girls desperate for a father's love, the perfect prey," Benson says.

The squad checks with Colin and Anne to see if they have any enemies and discover that Colin had a contentious relationship with Phillip Kelly. Colin fired Kelly from the hospital after he discovered him operating while drunk. Rollins and Finn interview Kelly who calls Colin a "sanctimonious prick," but he does not fit the description of the suspect. Later, Colin anxiously tells SVU that his daughter Taylor is missing. The detectives look in Taylor's room and discover that she was listening to the same jazz song that the other teenage girls were listening to when they danced with their donor father. "Oh my god, does he have Taylor?" Anne frets.

Colin and Anne tell SVU about Sean Albert, a former college boyfriend of Anne's who she stopped seeing when she met Colin. They also remember that Colin had Sean arrested when he discovered him taking the MCAT exam for other people. Anne suddenly receives a text message from Sean that threatens to hurt Taylor unless she meets him at a bar. Later, Fin and Rollins confront a handsome and meticulous Sean at the bar who refuses to talk to anyone except for Anne.

"Where's Taylor, Sean?" Benson asks in the interrogation room, but Sean refuses to answer until Anne meets with him. Benson and Amaro are able to get Sean to talk and confess to a vendetta he has for Colin and the egotistical attitude he throws in everybody's face. He reached out to Colin's children because they needed someone in their lives; "I just wanted to give them a father's love," Sean eerily tells Amaro.

Sean realizes that Anne is watching his interrogation from behind the glass mirror. He yells that he never found the right person in life after her, but then he found her daughter. He will only tell Anne where she is, and only if she will dance with him. Anne reluctantly agrees, as she cautiously takes his hand and follows him in an intimate dance while Colin helplessly watches. When the song ends, Sean whispers in her ear that he killed Taylor. Anne screams in agony as everyone rushes in to separate Sean from a hysterical grieving mother.

The squad tries to figure out the reasoning for Sean murdering Taylor; it doesn't seem to fit his MO. Benson suddenly has a hunch, and we follow her and Amaro to a hotel where they discover Taylor, alive and well, sitting in the room waiting for Sean to return. Turns out Sean played one last mind game on Colin and Anne and lied to them about Taylor's fate. Benson tries to tell Taylor who Sean really is, but she quickly denies any of the accusations. "There is a reason I never felt close to my dad. It's because he's not my real father, Sean is!" a manipulated Taylor screams at Benson. 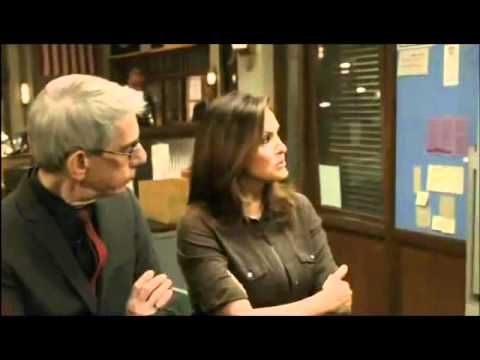