It is opening night at an immersion play called "Nine Circles" based on Dante's Inferno. Theatergoers do not sit in seats; they participate by walking from set to set wearing ritual animal masks such as a goat, monkey or a hawk. Backstage, director Ted Scott brings flowers to the dressing room of his gorgeous new star, Megan. Ted attempts to kiss Megan on the lips, but she deflects his advances. Later, Megan is acting in a scene when a goat-masked figure advances and grabs her from behind while someone in a hawk mask holds her arms. The actress begins to painfully cry for help as the masked goat forcibly rapes her. The audience stands and watches, thinking it's all part of the play.

Benson interviews a visibly shaken Megan as she explains how someone pretending to be another actor in the scene forcibly raped her on stage. She can't describe the attacker or the person who held her hands except for the masks they were wearing: a goat and hawk. Ted blames himself; he thinks an audience member got too emotionally caught up in the play and had to participate. Back at the squad room, the detectives begin tracking down audience members by looking at box office and credit card receipts. Benson and Amaro re-interview Megan at her apartment hoping to get more information. Megan is recovering with the help of her roommate, Holly. Megan explains how she just moved to NYC six months ago and this was her first acting job; she can't believe this happened to her.

Fin and Rollins visit the apartment of Estelle Roberts. Credit card receipts prove she bought tickets four nights a week during previews, but Estelle is a frazzled 60-year-old woman with no knowledge of the play. Rollins notices Estelle has a son and walks into his room to discover massive photos of Megan pasted all over his wall and a live video feed of Megan's apartment on his computer. Megan knows Jason Roberts as her IT guy and agrees to participate in a sting to capture him. In interrogation, Jason denies that he raped Megan and is devastated it happened to her. He shot video of the performance and gives it to the detectives, which leads them to the man wearing the hawk mask that was forcibly holding Megan's arms during the rape.

Rollins and Fin interview the man that wore the hawk mask. He is a theater critic who admits to getting caught up in the play and holding Megan's arms, but he thought it was all part of the show. He remembers that the man in the goat mask was wearing cufflinks with the word "sustained" engraved on them. Detectives discover those specific cufflinks belong to Judge Gerald Crane. Benson and Amaro talk to the judge who admits he was the goat; he denies the sex was a rape but rather was consensual. He tells them that Megan arranged the entire thing to fulfill her fantasy of a public rape. Later, Judge Crane's lawyer shows evidence to the detectives that Megan has been emailing the judge specific details of how to perform the sexual fantasy. They never met in person, just talked by email and on a website called "Sugarbabyz" where older men can find younger women.

Benson asks Megan about the "Sugarbabyz" website and the emails to the judge, but she denies knowing anything about them or ever knowing a Judge Crane. Later, they ask Jason if he created the profile of Megan for the website to punish her in some way. Jason says no, then helps the detectives learn the fake emails were sent from a coffee house across from the theater. New evidence and video from Jason bring the detectives back to suspect the play's director, Ted Scott.

They theorize that Ted set the whole rape up to help the publicity of his play and to get revenge on Megan for turning him down romantically. Fin and Rollins also find out that Judge Crane presided over Ted's contentious divorce proceedings and that "Dixie" was not only the judge's safe-word with Megan, but also the name of Ted's first play. They bring Ted in for questioning. Ted denies orchestrating the rape to get revenge. He pleads with the detectives that someone is setting him up.

Benson re-interviews Judge Crane and tells him to his dismay that Megan was not the one sending emails; he was set up. The judge is taken aback as he learns that he unknowingly raped a woman. The detectives try to figure out the connection between all the current suspects. They look at the "Sugarbabyz" website with Judge Crane who shows them all the posted women he met through the site. The detectives are taken aback as he points out one of the girls he dated. It's Megan's roommate, Holly!

Rollins and Amaro find Holly helping Megan pack up her belongs to go back home. They mislead Holly by saying Ted the director was the one that set up the rape. Megan doesn't believe it, but Holly jumps in to reinforce the detectives theory by saying Ted was always overstepping his bounds with her. Rollins then makes her move by confirming Holly knew Ted through the "Sugarbabyz" website. Megan is confused as the detectives mention that Holly and Ted went out on several dates. Holly says she needed the money. The detectives tell Holly they also know about her sexual relationship with Judge Crane. Holly gets defensive, agitated. She felt jealous of Megan and her success. Although Holly was the better actress, she was always passed over for the more attractive Megan, and she was sick of it. Holly had to perform degrading acts to get ahead in acting while she saw Megan just effortless catch directors' eyes. By setting up the rape, Holly wanted Megan to know what it felt like to be dirty and used. Megan is devastated; she thought Holly was her friend. Holly angrily looks back at Megan, "It's about time something bad happened in your life."

Capt. Cragen tells the detectives that the DA will charge Judge Crane and Holly with rape. He surmises the judge will plead-out discreetly while Holly will most likely get 25 years in prison. Rollins walks up to Holly's cell to take her to prison transport. A disheveled Holly starts to walk but then asks the detectives for a minute. Later, a beautified Holly walks outside where the paparazzi and news crews fight for a shot. Holly seductively smiles as the flashes of the cameras overtake her. Rollins tells Holly, "You wanted your 15 minutes... you got it." 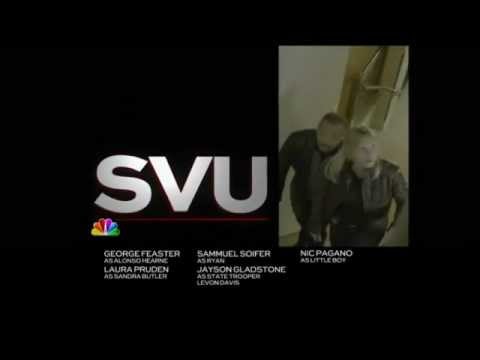