In a barrio of Miami, an UnSub practitioner of a dark Afro-Caribbean religion has been killing people, cutting off their hands, and stuffing shells in their mouth and eyes. The BAU team flies to Florida to stop him before he kills again.

Upon arriving in Miami, the team visits the house of the latest victim in order to look for clues. Then they pay a visit to the soup kitchen nearby where they meet Jimmy Mercado, a local who knew the victim. Jimmy tells them about Santeria, but explains that human mutilation and sacrifice are not parts of the religion. They also meet Julio Ruiz, who runs the soup kitchen, and his teenage assistant Elian. Both also practice Santeria, but have no desire to talk to the cops.

Hoping to find out more about Santeria and other Afro-Caribbean religions, Garcia directs the team to the office of professor Hollis Walker at the university of Miami. He tells them that the killings could be a result of Palo Mayombe, a dark, bizarre religion that involves a severed human head as part of its rituals. The professor tells the team that he is almost finished writing the only book on the subject. The meeting is interrupted with the news that Jimmy Mercado is dead - the killer is now targeting people who spoke with our team.

After giving the profile, our team goes back to the soup kitchen, and this time a full-blown Santeria service is going on. After breaking it up, Julio is dragged back to the station for further questioning. Turns out he was in jail for 15 years after being part of a gang that was known to cut off the body parts of their enemies.

After interviewing Julio, Reid realizes that he is not their man - the soup kitchen proprietor is genuinely remorseful. His protege, Elian, does not seem quite so clean. Our team uncovers drugs and remnants of the victims in his bedroom, and the child seems to have fled the scene. Using Julio as a guide, we race to find Elian before he kills again.

Upon further review of the evidence, though, it starts to look like Elian was framed. Parts of the crimes fit in with Palo Mayombe, but others did not. No prints were left at the scene, but a bloody footprint conveniently matched a shoe found in Elian's room. Prentiss and Morgan figure it out first: it's professor Walker, trying to get press for his book, who did the crimes and framed Elian.

Back at the soup kitchen, Julio is kidnapped while searching for Elian. There's no trace of him when our team gets there on the trail of the professor. When Reid is drawn out of the main building and toward a nearby chapel, he stumbles upon the killer and a tied-up Julio. After a tense struggle, Reid manages to outsmart and overpower his assailant, and the rest of the team shows up to arrest the UnSub and free Julio and Elian.

This case is bookended by scenes of Dr. Reid in a hospital getting an MRI of his brain. He has been suffering from very bad headaches and even some mild hallucinations. Throughout the episode, it is hinted that there might be something very wrong with Reid, but in the end the scans of his brain are normal. The doctors suggest he might be suffering psychosomatic symptoms due to stress. 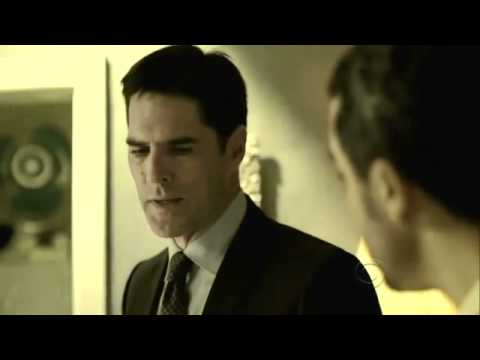