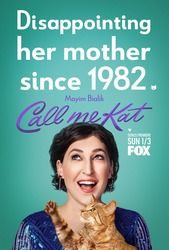 Based on the BBC UK original series "Miranda", the new comedy, "Call Me Kat" stars Mayim Bialik as a woman who struggles every day against society and her mother to prove that she can still live a happy and fulfilling life despite still being single at 39. Which is why she recently spent her entire savings to open a cat café in Louisville, Kentucky.

It was expected of Kat (Bialik) to be married with kids by now, but for many reasons, she's still single - and totally fine with it. Of course, Kat's mother, Sheila (Emmy Award winner and Golden Globe nominee Swoosie Kurtz), views her daughter's single-hood as her own personal failure, but Kat remains determined to live a fulfilling life, and charts her own course to happiness. Working alongside Kat at the cafe are Randi (Kyla Pratt), a confident millennial and self-proclaimed "non" cat person; and PHIL (Emmy Award winner Leslie Jordan), who recently broke up with his longtime partner. Although Kat celebrates her independence, her single-forever plans may begin to veer off-course, when her former crush and good friend, Max (Cheyenne Jackson), returns to town and takes a job as a bartender at the piano bar across the street, working with his friend, Carter (Julian Gant).