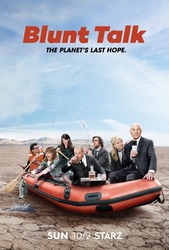 Set in Los Angeles, the story follows Walter Blunt, a British import intent on conquering the world of American cable news and the fallout from his well-intentioned, but mostly misguided decision-making, both on and off the air.

Through the platform of his nightly cable news show, Blunt is on a mission to impart his wisdom and guidance on how Americans should live, think and behave. Besieged by network bosses, a dysfunctional news staff, numerous ex-wives and children of all ages, Blunt's only support is the alcoholic manservant he transplanted from the U.K. to join him in Los Angeles.

In season 2, Walter Blunt and his team are on top of the network ratings when Walter runs into an old flame, in town to investigate a conspiracy involving one of Los Angeles' most crucial environmental threats. Rosalie, Jim, Celia, Martin, and Shelly (with all their various neuroses intact) are by Walter's side as he delves into his past, which leads him into a web of intrigue affecting the future of LA.