They spoke out online after cancer survivor Ronnie Turner died on December 9, reportedly after neighbours outside his L.A. home failed to resuscitate him when he was struggling to breathe on their street.

AceShowbiz - Tina Turner and her daughter-in-law have paid tribute to the singer's "beloved" late son. Making use of their respective social media accounts, they spoke out online after cancer survivor Ronnie Turner died aged 62 on Friday, December 9, reportedly after neighbours outside his Los Angeles home failed to resuscitate him when he was struggling to breathe on their street.

Taking to her Instagram account, Tina shared a black-and-white picture of the musician. "Ronnie, you left the world far too early. In sorrow I close my eyes and think of you, my beloved son," so she wrote.

Ronnie's wife, the French singer Afida Turner, confirmed her husband's death in an Instagram post that called him a "true angel" and her "best friend." She said, "I did the best to the end this time I was no(t) able to save you. Love you for... 17 years this is very very very bad and I am very mad. This is a tragedy u with your brother Craig and your father Ike Turner and Aline rest in paradise… So unfair."

Afida, who married Ronnie in 2007, was referencing the death of his older brother Craig, who shot himself dead aged 59 in 2018. Ronnie, who was an accomplished musician like his parents and played in a band called Manufactured Funk, had survived cancer.

While a cause of death has not been announced, TMZ said law enforcement sources said they had received a 911 call on Thursday morning, December 08, from someone who told them Ronnie was outside their home and "having a hard time breathing". The insider added, "A few minutes later, he wasn't breathing at all."

Paramedics reportedly "rushed to the San Fernando Valley address" where bystanders were attempting to resuscitate Ronnie, but apparently the efforts "didn't work" and he was pronounced dead at the scene. Tina's eldest son Craig, who she had when she was saxophonist Raymond Hill, shot himself dead in July 2018.

The realtor took his life at his Studio City home aged 59, with Tina tweeting at the time, "My saddest moment as a mother. On Thursday, July 19 2018, I said my final goodbye to my son, Craig Raymond Turner, when I gathered with family and friends to scatter his ashes off the coast of California. He was fifty-nine when he died so tragically, but he will always be my baby." 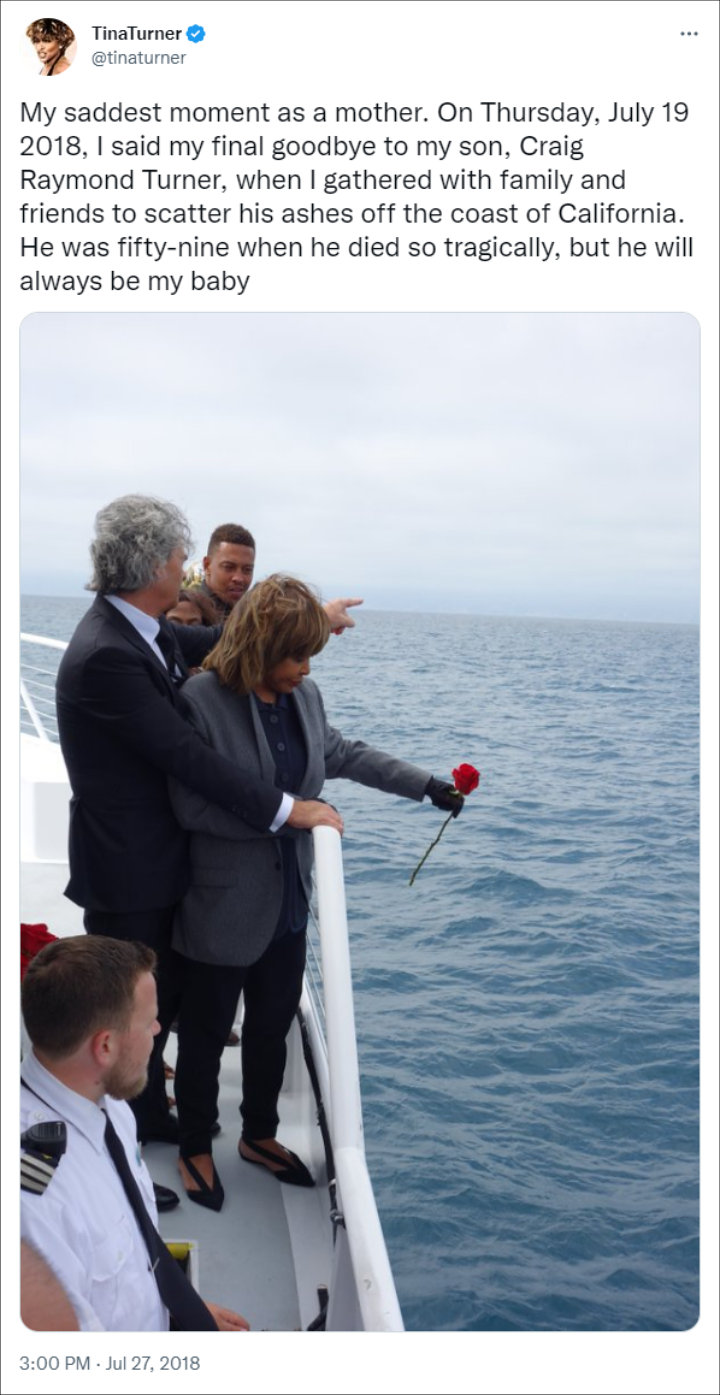 Tina Turner paid tribute to son Craig after his death.

Tina had Ronnie in 1960 with her husband Ike, from whom she split in 1976 after the singer accused him of beating her before he died from a drug overdose in 2007. Ronnie appeared alongside Tina the 1993 biopic on the singer, "What's Love Got To Do With It".

Tina also adopted ex-husband Ike's two sons, Ike Jr and Mike. Ike Jr told DailyMail.com in 2018 he was estranged from his adoptive mother, while Mike has stayed out of the spotlight.