More woman come forward with receipts showing their alleged conversations with the Maroon 5 frontman after he denied cheating on his wife Behati Prinsloo, but did admit he 'crossed the line.'

AceShowbiz - Adam Levine is hit with more sinful allegations after denying affair with Sumner Stroh. More women have come forward with claims that the singer sent them flirty messages and even shared the receipts.

A comedian named Maryka posted on her Instagram Story a screenshot of an alleged conversation with the Maroon 5 frontman in which he told her, "Distract yourself by f**king with me!" Maryka also shared a video Adam sent to her in which he said, "I'm stupid," though the context in which he sent it is not clear. 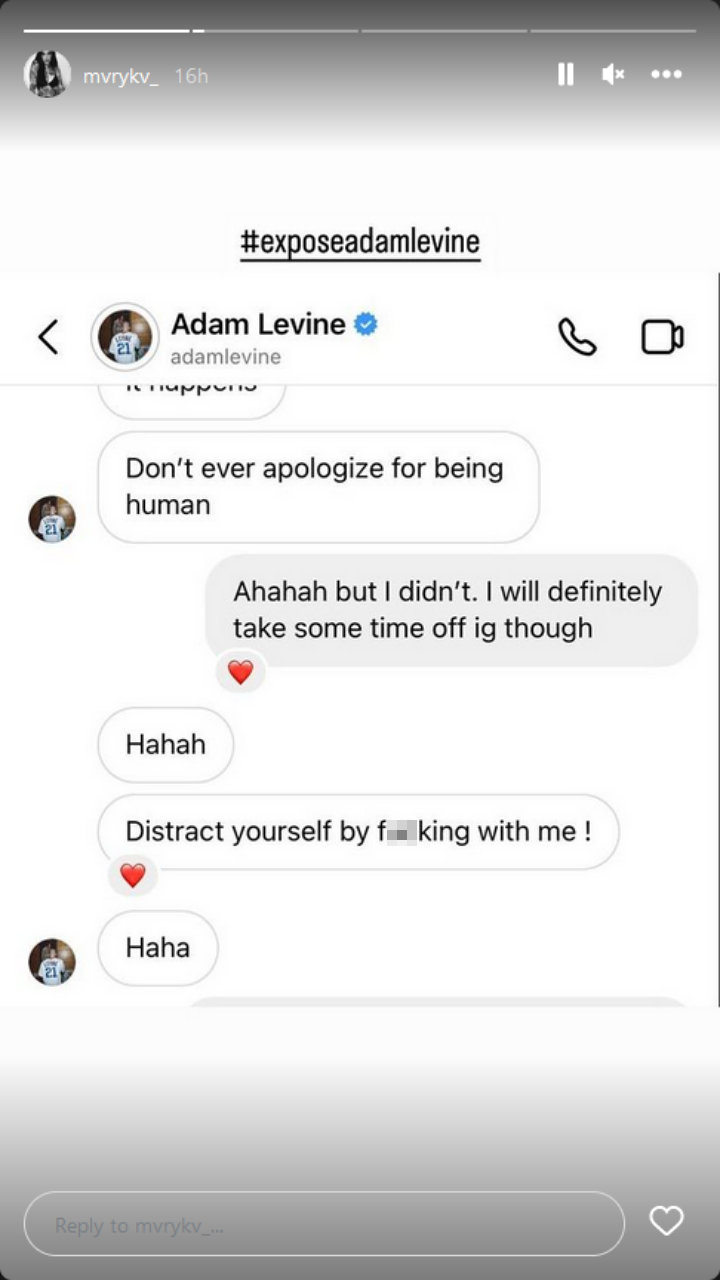 Comedian Maryka posted a screenshot of Adam Levine's alleged message to her.

Another woman named Alyson Rosef also posted a bunch of direct messages allegedly from Adam. "I shouldn't be talking to you you know (right)?" he allegedly asked in one of the messages. During another exchange, when Alyson stated she only likes metal music, the "She Will Be Loved" singer allegedly responded, "Said no hot chicks ever other than you."

This comes after model Sumner Stroh exposed Adam for his alleged affair with her. In a TikTok video, Sumner claimed they were dating for about a year, but have not been talking for months now. She also showed her alleged conversation with Adam in which he asked, "Ok, serious question. I'm having another baby and if it's [a] boy I really wanna name it Sumner. You OK with that? DEAD serious."

Adam has responded to Sumner's claims. In a statement posted on his social media page on Tuesday, September 20, he denied having "an affair," but admitted to showing "poor judgement" and that he "crossed the line."

Following Adam's denial, Sumner seemingly responded by posting a cryptic message. "Someone get this man a dictionary," she posted on her Instagram Story. Contrary to Adam's claims, Sumner told Page Six that she and Adam did have a "physical" relationship in 2021.

However, Sumner has taken accountability for her alleged relationship with Adam, after previously saying that she felt "exploited." In another TikTok video, the 23-year-old said she "fully realize[s]" she is "not the victim" in the situation. Apologizing to Adam's wife Behati Prinsloo, she added, "I'm not the one getting hurt in this. It's Behati and her children. And for that I'm so, so sorry."