After the 'Love Me Like You Mean It' songstress announces their 'deeply difficult decision' to part ways, her husband confirms that they're ending their five-year marriage.

AceShowbiz - Morgan Evans has broken his silence on his shocking divorce from Kelsea Ballerini. After his wife announced they made a "deeply difficult decision" to end their marriage, he confirmed that they're indeed parting ways.

The 37-year-old country music artist took to his Instagram Story on Monday, August 29 to address their split. "I am very sad to confirm that after almost five years of marriage, Kelsea and I are parting ways," he lamented, before adding, "I wish it were otherwise but sadly it is not."

Just hours before, Kelsea left their fans blindsided with the divorce announcement on her own social media page. "Friends, I've always tried my best to share my life with you in a real and vulnerable way, while also protecting layers of my personal life as they unfold," she began her message posted on her Story. "This is now public record so I wanted you to hear from me directly that I am going through a divorce."

Hinting that they had been mulling over it before making the decision, she penned, "This deeply difficult decision is the result of a journey of love, growth, and effort that ultimately has come to an end. It's hard to find the words here...but I feel extremely grateful for the years of marriage to Morgan and hopeful for the next seasons."

The 28-year-old also asked fans for their support as sharing, "With very active schedules coming up, please be mindful that we are both fragile, actively healing, and showing up the best we can." 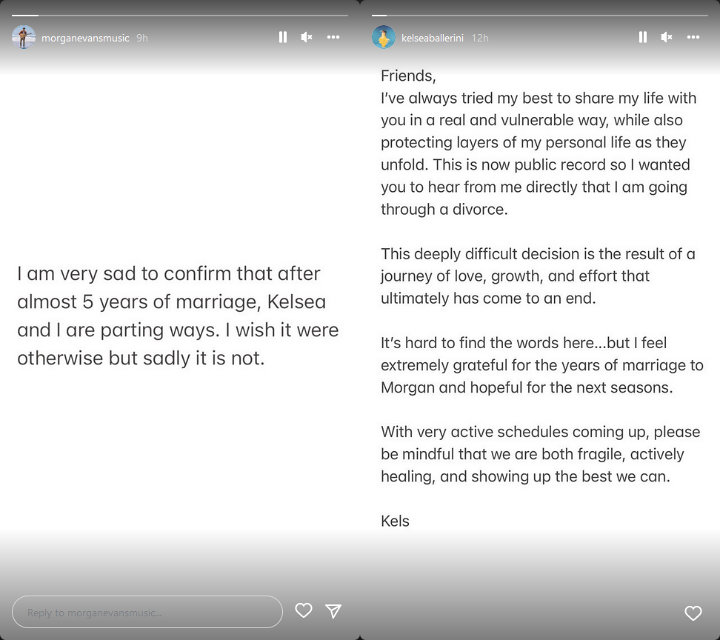 Morgan and Kelsea got engaged on Christmas Day of 2016 after dating since March. They tied the knot on December 2, 2017 in Cabo San Lucas, Mexico. Prior to the divorce announcement, they showed no signs of trouble in their marriage.

Though they rarely posted photos together, the now-estranged spouses often attended red carpet events together and spoke about the lessons they'd learned over the course of their marriage. In November 2021, she credited regular couples therapy for keeping her marriage on track.