Making use of her Instagram account, the 'Scenes from a Marriage' star shot back at critics of the 'Don't Worry Darling' bearing her breasts in a see-through Valentino gown.

AceShowbiz - Jessica Chastain defended Florence Pugh's choice to wear a nipple-baring dress. On Tuesday, July 12, the "Scenes from a Marriage" star shot back at critics of the "Don't Worry Darling" bearing her breasts in a see-through Valentino gown at the Italian fashion house's Haute Couture show last Friday, July 8 in Rome.

On her Instagram Story, the 45-year-old actress wrote, "Why is it so threatening for some men to realize that women can love our bodies without your permission?" She went on concluding, "We don't belong to you." 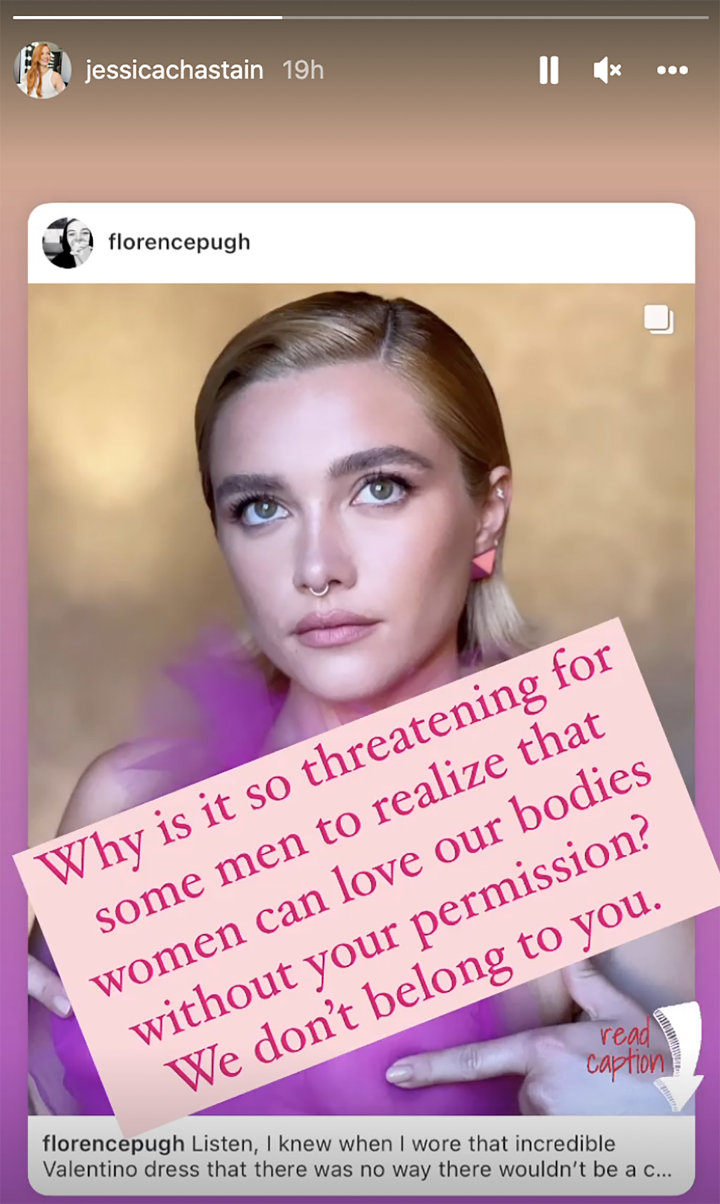 "The Eyes of Tammy Faye" star's defence of Florence and her hot pink gown came after the latter made a passionate appeal to bodyshamers on Monday, July 11. The "Midsommar" star captioned a photo of herself wearing the couture gown on the red carpet and said on Instagram, "Listen, I knew when I wore that incredible Valentino dress that there was no way there wouldn't be a commentary on it. Whether it be negative or positive, we all knew what we were doing."

Florence then highlighted "how easy it is for men to totally destroy a woman's body." The 26-year-old actress continued by asking, "It isn't the first time and certainly won't be the last time a woman will hear what's wrong with her body by a crowd of strangers, what's worrying is just how vulgar some of you men can be."

The "Little Women (2019)" star additionally shared that she has "come to terms" with her body after struggling with since being a teenager. She said, "Thankfully, I've come to terms with the intricacies of my body that make me, me. I'm happy with all of the 'flaws' that I couldn't bear to look at when I was 14."

Florence also expressed her "gratitude" to the "very strong, powerful, curvy women" in her orbit who had positively impacted her body journey. She continued, "We were raised to find power in the creases of our body. To be loud about being comfortable. It has always been my mission in this industry to say 'f** it and f** that' whenever anyone expects my body to morph into an opinion of what's hot or sexually attractive."