The 22-year-old singer, who previously addressed their dating rumors, points out what actually happened between the two, just a day after the comedian claimed that he never dated her.

AceShowbiz - Olivia O'Brien clarified her initial comments about her alleged romance with Pete Davidson. The "Josslyn" singer, who previously addressed the dating rumors, pointed out what actually happened between the two, just a day after the comedian claimed that he never dated her.

"news outlets are taking things i said in an interview (after being asked a VERY specific question) wayyy [sic] out of context," Olivia wrote in an Instagram Story on Friday, July 1. "i never claimed to date anyone. stop trying to start weird drama over me texting someone 2 years ago. jesus christ."

The 22-year-old went on to flipped off the camera in a separate Instagram Story. She additionally urged people to "watch the f**king interview or shut your god damn mouth," referring to her interview on the "BFFs: with Dave Portnoy, Josh Richards and Brianna Chickenfry" on Wednesday. 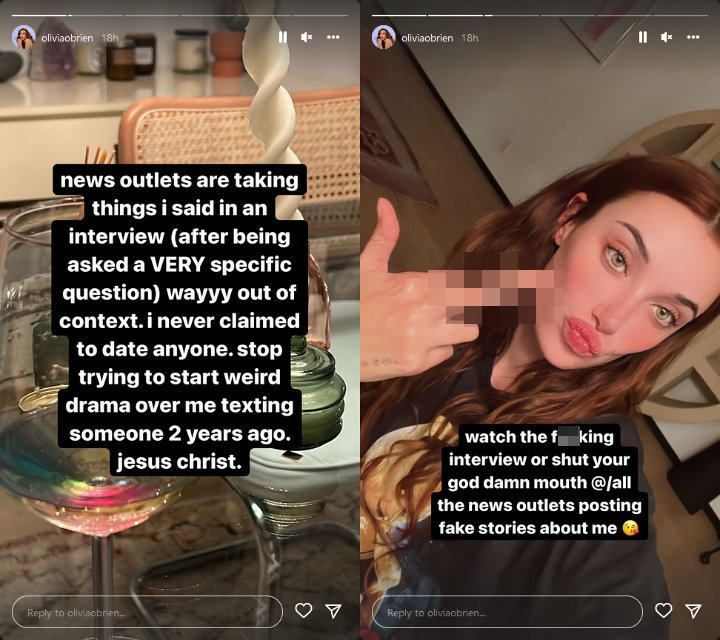 In the sit-down, the hosts brought up an anonymous post sent to DeuxMoi which read, "I have it on good authority that pete and phoebe are in fact an item. He ended things with B-list popstar/influencer he had been seeing beforehand for phoebe."

When asked if the rumors were true or false, Olivia responded, "Um, yeah. Uh, Pete. Um, I didn't think-I didn't think that anyone knew about that. I really didn't." The 22-year-old added, "Yeah, yeah, we, that's true. Nice guy." She also shared that it happened "a long time ago," around October 2020.

She additionally claimed that he broke things off with her via text to start seeing "Bridgerton" actress Phoebe Dynevor. She said, "He texted me and was like, 'I'm seeing someone else. 'So, like, I can't.' "

The "I Hate U, I Love U" songstress, however, didn't have hard feelings toward the "Saturday Night Live" alum despite the split. Gushing over the comic, who is currently dating Kim Kardashian, she said, "He's hot and he's really funny. And he's really sweet. He's a really sweet guy."

In response to the claims, a rep for Pete was quick to set the rumors straight. The 28-year-old funnyman has stated that they were just "friends." The rep stated, "There is no truth to [Olivia's dating claims]," before stressing that the pair "were friends and hung [out] a few times."