The Bad Boy Records CEO shows love to the City Girls star for her support at the 2022 BET Awards, during which he gave a shout-out to his ex Cassie in front of her rumored current girlfriend.

AceShowbiz - Sean "P. Diddy" Combs has publicly acknowledged Yung Miami's support for him at the 2022 BET Awards. Days after the event where his rumored girlfriend held a "GO PAPI" sign, the hip-hop mogul has sung praise to the raptress via his Instagram account, calling her act "the sweetest things anyone's ever done for me."

Taking to the photo-sharing platform on Thursday, June 30, Diddy shared a picture of Miami holding the red sign. "This is one of the sweetest things anyone's ever done for me!" he wrote in the caption. He went on revealing Miami's nickname as adding, "Thank you Shawty Wop!"

Miami was fully supportive of Diddy at the 2022 BET Awards, during which he was presented with Lifetime Achievement Award. But while the one-half of rap duo City Girls showed her love for the "I'll Be Missing You" hitmaker, he sang praise to his ex Cassie in his acceptance speech instead.

During his speech, the 52-year-old thanked "everyone who played a part in my life," including his ex Cassie, whom he credited for bringing him out of the "dark times." He also paid tribute to the late Kim Porter, who is the mother of his three children, as saying, "Baby girl, this is for you," prior to his performance of "I'll Be Missing You" with Faith Evans and Maverick City Choir. He also yelled out, "I miss you so much, baby," midway through the song.

Diddy soon came under fire for his "shady" shout-out to Cassie, with one writing, "Diddy was being shady with that Cassie shoutout. He's trying to get under her husband's skin. I feel like he was trying to imply that they were still communicating after she got with him." Another warned, "If Diddy don't stop harassing Cassie," while a third user wrote, "Is it me or does Diddy want happily married Cassie back."

Others insinuated Diddy disrespected Miami by mentioning Cassie in front of his rumored current girlfriend. "Diddy just thanked Cassie while caresha holding a sign," one pointed out. Another baffled critic said, "I can't believe Diddy ! Like Cassie over Caresha ????? BYE." Another commented, "Damn, Diddy shouted out Cassie in front of Yung Miami." 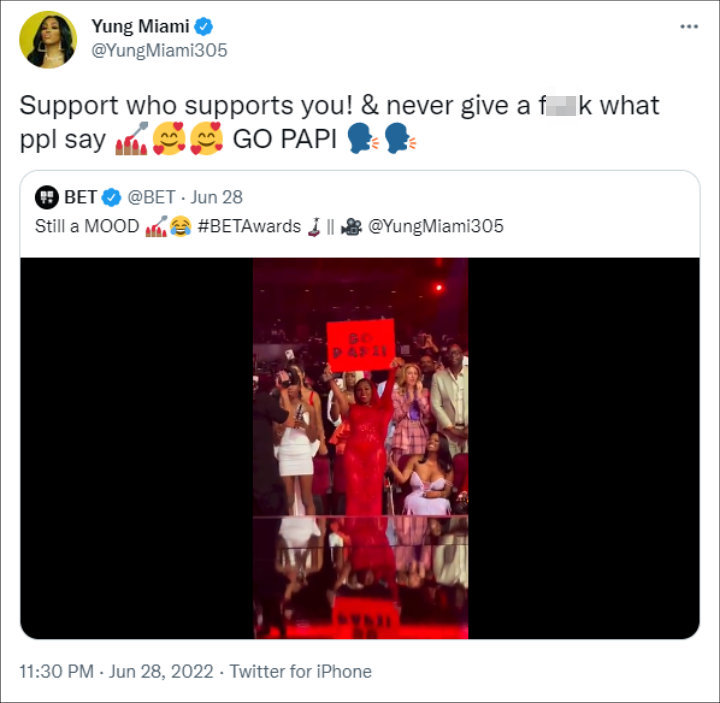 Yung Miami doubled down on her support for Diddy.

However, Miami didn't seem to be unbothered by the lack of acknowledgment from Diddy. Doubling down on her support for him, she retweeted BET's clip of her holding the "GO PAPI" sign and writing along with it, "Support who supports you! & never give a f**k what ppl say GO PAPI."

P. Diddy's Mom Crashes His Instagram Live to Give Warning to Ma$e