The Bronx-raised star's fiery Twitter post arrives after Lizzo was criticized over 'unintentional' use of 'Ableist slur' on her song, prompting the 'Truth Hurts' hitmaker to issue an apology.

AceShowbiz - Cardi B was minding her own business until one Internet user decided to drag her into the controversy surrounding lyrics of Lizzo's "GRRRLS". Taking to her Twitter account, the "Bodak Yellow" hitmaker fired back at the individual for including her "in anything that people are getting dragged for."

The person initially commented on another user who pointed out that a newer Cardi song features the R-word but "no one blinked." To that, the individual responded, "Cardi is slim and light-skinned She will often 'get away' with more than other women, especially those who look like Lizzo, will. That's the world we live in. People may get mad but I don't care lol Colorism and fatphobia shape SO MANY reactions and extensions of 'grace'."

Catching wind of the comment, Cardi was quick to fire back. "Ya will do mental gymnastics to include me in anything that people are getting dragged for," the raptress wrote on Wednesday, June 15. "People have called me out for plenty of s**t."

"Yall do it every week SOMETHINGS I apologize for & some things I will tell y'all TO SUCK D**K," the wife of Offset added before concluding, "personally If I was Lizzo I would of said SMD." 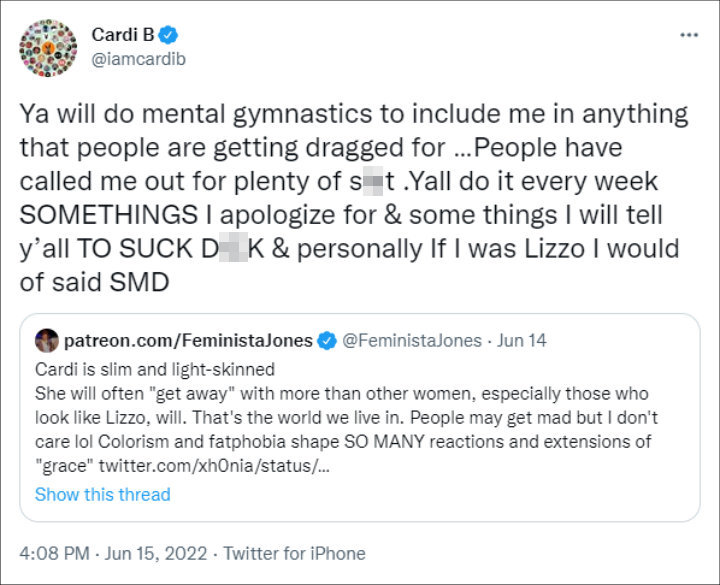 Cardi B hit back at someone dragging her into Lizzo's 'GRRRLS' controversy.

The Bronx-raised star's fiery Twitter post arrived after Lizzo was criticized over an "unintentional" use of "Ableist slur" on her song "GRRRLS". Following the backlash, the Grammy Award-winning artist issued an apology and agreed to change the lyric of her new single, which contained the word "spaz." According to online dictionary Lexico, "spaz" has often been used to describe losing "physical or emotional control." However, it has fallen increasingly out of fashion because of the word's origin from "spastic," which is "a form of muscular weakness (spastic paralysis) typical of cerebral palsy."

"It's been brought to my attention that there is a harmful word in my new song 'GRRRLS'. Let me make one thing clear: I never want to promote derogatory language," Lizzo wrote on Monday. "As a fat black woman in America, I've had many hurtful words used against me so I overstand the power words can have (whether intentionally or in my case, unintentionally). I'm proud to say there's a new version of GRRRLS with a lyric change."

The 34-year-old star concluded, "This is the result of me listening and taking action. As an influential artist I'm dedicated to being part of the change I've been waiting to see in the world. Xoxo, Lizzo."