AceShowbiz - Details of actress Jasmine Davis' quit from Showtime's "The Chi" surfaced online. While the 30-year-old star hinted that she left the show due to its "very toxic environment," a new report claimed that it was because she was caught faking a vaccination record.

Sources told Page Six that producers at 20th Television discovered that Davis, who played salon owner Imani, had submitted a fake COVID vaccination card. The studio allegedly opened an investigation into the matter.

"Jasmine asked for a vaccination exemption when she submitted a vaccination card for the prior season," an insider shared. "This triggered an investigation and Jasmine then quit the show."

A rep for Davis, who announced her exit in April, has yet to comment on the report.

Prior to this, the openly transgender actress addressed her departure from the show. She told fans that her reasons for leaving were due to "personal unhappiness."

"4 2 years i've been bullied 4 being on a show that was kind of a nightmare & the moment I clap back Instagram flag my comment as harassing them for trying to harass me on my page," she explained. "it's unfair how they can come on my page and say whatever with no consequences." 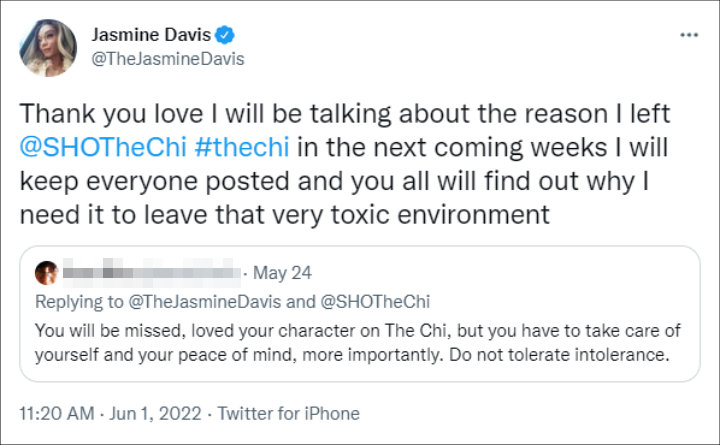 In a separate post, she tweeted, "Thank you love I will be talking about the reason I left @SHOTheChi #thechi in the next coming weeks I will keep everyone posted and you all will find out why I need it to leave that very toxic environment."