Making use of social media, the 'Can't Be' raptress clarifies that even though she is no longer in a relationship with rapper Foogiano, she still cares for him.

AceShowbiz - Renni Rucci has been hit with rumors that she might have cheated on rapper Foogiano. However, on Wednesday, May 11, the "Can't Be" raptress shut down the allegations once and for all by declaring that she is single on her social media accounts.

Making use of her Twitter account, the "Hands On Ya Knees" raptress cleared the air on her relationship with her ex-fiance. She tweeted, "You can't cheat when you're single." She added a wink emoji.

Renni cleared the air on her relationship with Foogiano.

In response, one user gave a shady reply to Renni's tweet that read, "Mf u was just engaged to the n***a. Now u single? When u announced that?" It prompted the raptress to fire back by pointing out, "I don't have to announce s**t yall mfs ain't buy the ring or ask the question so what's it to ya…WE know OUR business." 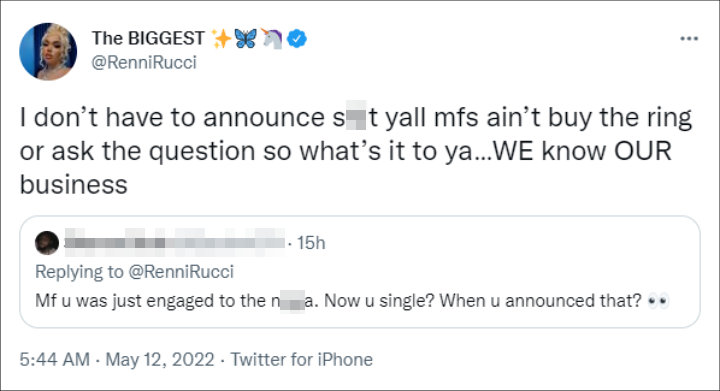 Renni clapped back at hater who gave a shady reply.

Others quickly took side with the "Bag Talk" raptress on the matter. One agreed to her statement by writing, "People always want to be entitled to an explanation smh." Another gave a crying emoji and stated, "You fussing with a dude nobody even knows."

One user who agreed with her statement.

Another user who showed agreement.

Turning to her Facebook page, Renni further explained that she did not cheat on her ex. At the same time, she stressed that she made sure he is "good and taken care of" while serving his five-year sentence for a parole violation. She declared, in the message, that even though she is no longer with Foogiano, she still cares for him. She wrapped up her message by writing, "FREE FOO but b***h I'm F R E E TOO."

Renni began dating Foogiano back in 2020 after he slid into her Instagram DM. Initially, she only saw the interaction as business since she asked to be featured on a remix of his single "Molly", but their relationship blossomed into something more.

On October 4, 2021, which happened to be Renni's birthday, Foogiano proposed from behind bars. He sent her a birthday package with a shiny diamond engagement ring in it. She celebrated the proposal by sharing a series of pictures of the package on her Instagram account. Along with it, she wrote a caption that read, "Best birthday ever! #DirtyThirty from a girlfriend to fiancee."