Taking to his social media account, the Giancarlo depicter on 'Black Monday' hints that he auditioned to play a physical therapist, who helps Carrie Bradshaw recover from hip surgery.

AceShowbiz - Britney Spears' fiance nearly became a part of the "Sex and the City" revival "And Just Like That…". Taking to his social media account, Sam Asghari revealed that he failed his audition for the "dope role."

On Wednesday, December 29, the 27-year-old actor unveiled on his Instagram Story that he auditioned for the most recent episode of "And Just Like That…", but didn't end up landing the role. "Man, I was looking forward to this role for the reboot of 'Sex and the City', 'And Just Like That'," he shared, adding a laughing face with tears emoji.

In a following Story, Sam penned, "Shout out to the dude that got it! It was a dope role." The personal trainer also hinted that he auditioned to play a physical therapist, named Travis, who helps Sarah Jessica Parker's Carrie Bradshaw recover from hip surgery. 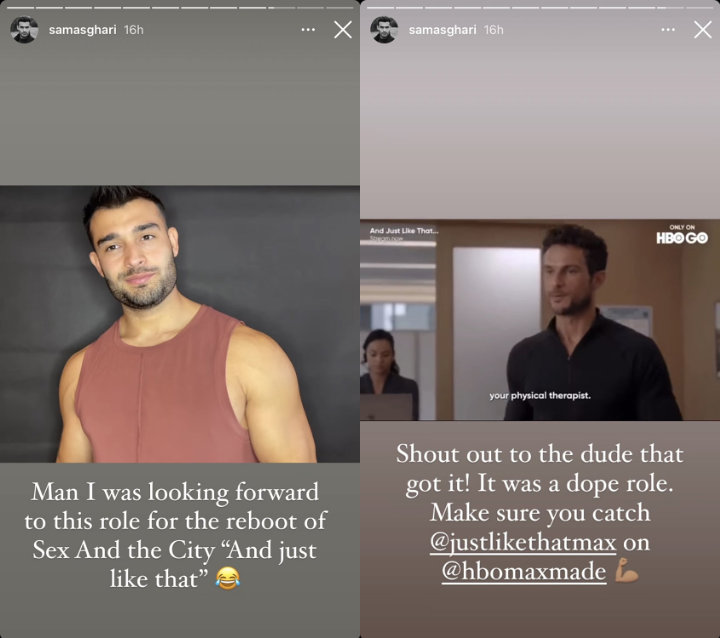 Sam Asghari revealed that he failed his audition for a role on 'And Just Like That...'.
See also...

Though Sam missed out on "And Just Like That", he has already confirmed to be returning to the movie industry soon. In October, it's reported that the "Can You Keep a Secret?" actor will star as SWAT Sergeant Tobias in Randall Emmett's upcoming action thriller "Hot Seat" alongside Mel Gibson and Kevin Dillon. His rep, Brandon Cohen, described his character as "action-oriented."

"Hot Seat" follows a story of an ex-hacker, who is forced to break into high-level banking institutions by an anonymous man that planted a bomb under his chair at his office. Mel will play the man who must try to penetrate the booby-trapped building to get Kevin off the hot seat.

Sam's recent project was HBO Max's comedy-drama series "Hacks", which debuted in May. In the first episode, the Giancarlo depicter on "Black Monday" played a sexy Santa Claus who appears in a photo shoot with Deborah Vance, played by Jean Smart.

"It's only a few seconds, but it's such a strong few seconds," Sam said of his "Hacks" role in May. "Working with Jean Smart -- I'm flattered to work with such amazing talents that have been around the craft for such a long time. She was so professional. We had a great time."

HBO Max Cuts Off Chris Noth From 'And Just Like That...' Finale

Cynthia Nixon Blames Tone-Deaf 'SATC' for Initial Reluctance to Join Reboot '...And Just Like That'

Peloton Reacts to 'And Just Like That...' Character Dying On Its Bike