In a new interview, the Tyrion Lannister depicter addresses fans expressing their disappointment in the hit HBO show's finale that led them launch a petition to call for a re-do.

AceShowbiz - Peter Dinklage is aware of how fans were not happy with how "Game of Thrones" concluded. In a new interview, the actor, who played Tyrion Lannister on the hit HBO series, shared his opinion on why fans were "angry" about the show's finale.

"They wanted the pretty white people to ride off into the sunset together. By the way, it's fiction. There's dragons in it. Move on," the 52-year-old actor joked while addressing fans expressing their disappointment in the finale. They even launched a petition to call for a re-do.

In a serious note, Peter continued, "No, but the show subverts what you think, and that's what I love about it. Yeah, it was called Game of Thrones, but at the end, the whole dialogue when people would approach me on the street was, 'Who's going to be on the throne?' I don't know why that was their takeaway because the show really was more than that."

He went on to share, "One of my favorite moments was when the dragon burned the throne because it sort of just killed that whole conversation, which is really irreverent and kind of brilliant on behalf of the show's creators: 'Shut up, it's not about that.' "

"They constantly did that, where you thought one thing and they delivered another. Everybody had their own stories going on while watching that show, but nobody's was as good as what the show delivered, I think," he opined.

As for the backlash over the show's ending, Peter divulged, "I think the reason there was some backlash about the ending is because they were angry at us for breaking up with them." He continued, "We were going off the air and they didn't know what to do with their Sunday nights anymore. They wanted more, so they backlashed about that."

"We had to end when we did, because what the show was really good at was breaking preconceived notions: Villains became heroes, and heroes became villains," the "Cyrano" star added. "If you know your history, when you track the progress of tyrants, they don't start off as tyrants. I'm talking about, spoiler alert, what happened at the end of 'Game of Thrones' with that character change. It's gradual, and I loved how power corrupted these people. What happens to your moral compass when you get a taste of power? Human beings are complicated characters, you know?"

Chrisean Rock Claps Back at Wack 100 for Accusing Her of Breaking Into His House: 'That's Mine'

Maisie Williams Surprised by Arya's Sex Scene on 'Game of Thrones': I Thought She Was Queer 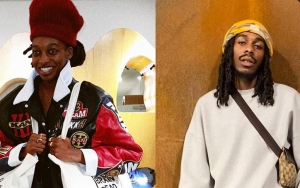