The music executive's spouse Jacqueline Avant was transported to a local hospital after she was shot during a home invasion at their Beverly Hills residence, but didn't survive.

AceShowbiz - Clarence Avant is mourning the loss of his wife Jacqueline Avant. The music executive's wife died after being shot and killed during a home invasion at their Beverly Hills residence. She was 81 years old.

According to the Beverly Hills Police Department, the communications center received a phone call on Wednesday, December 1 at 2:23 A.M. regarding a shooting that took place on the 1100 block of Maytor Place. When the authorities arrived at the scene, they found a victim with a gunshot wound but the suspect or suspects were no longer at the scene.

The police said Jaqueline was transported to a local hospital by the Beverly Hills Fire Department paramedics but she did not survive. No one else was injured. BHPD detectives remain on the scene to investigate.

The motive behind the attack remains unknown and authorities said they will not comment on speculation as to whether it was a robbery. The police said there's an ongoing homicide investigation. "The City of Beverly Hills and the Beverly Hills Police Department extends our deepest sympathies to the victim's families," the cops said.

"Jacqueline was an amazing woman, wife, mother and philanthropist and a 55 year resident of Beverly Hills who has made an immeasurable positive impact on the arts community," the statement continued. "She will be missed by her family, friends and all of the people she has helped throughout her amazing life."

Following Jacqueline's tragic death, former President Bill Clinton paid tribute via Twitter. "Jackie Avant was a wonderful woman, a great partner to Clarence and mother to Alex and Nicole, an active citizen & a dear friend to Hillary and me for 30 years," the politician said. "She inspired admiration, respect & affection in everyone who knew her. We are heartbroken. She will be deeply missed."

Viola Davis also mourned Jacqueline's passing. She tweeted, "So sorry for the Avant family. My heart goes out to you!!! OMG!!!! Where are we??!!! WHAT are we?!!" Meanwhile, Tyler Perry wrote, "My heart breaks for Clarence and Nicole and all the Avant family. This world can be so cruel and cold!! I have no idea what kind of sub-human could shoot an 81 year old woman, and in her own home." 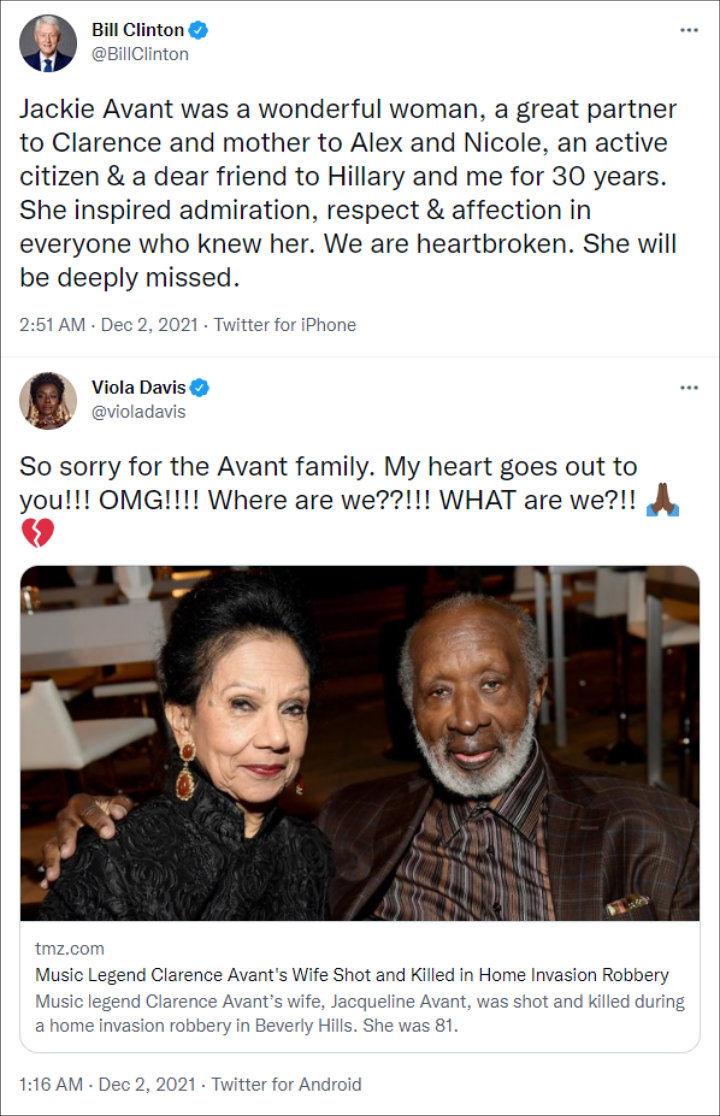 "But you can rest assured that every available resource will be used to find whoever is responsible for this awful nightmare," Tyler added. The "Diary of a Mad Black Woman" star concluded his post as saying, "This is tremendously sad."

In the meantime, Magic Johnson said he was "devastated" by the news of Jacqueline's death. Taking to his Twitter account, the NBA star penned, "Cookie and I are absolutely devastated at the loss of one of our closest friends Jackie Avant. She was senselessly murdered last night in a home invasion. This is the saddest day in our lives." 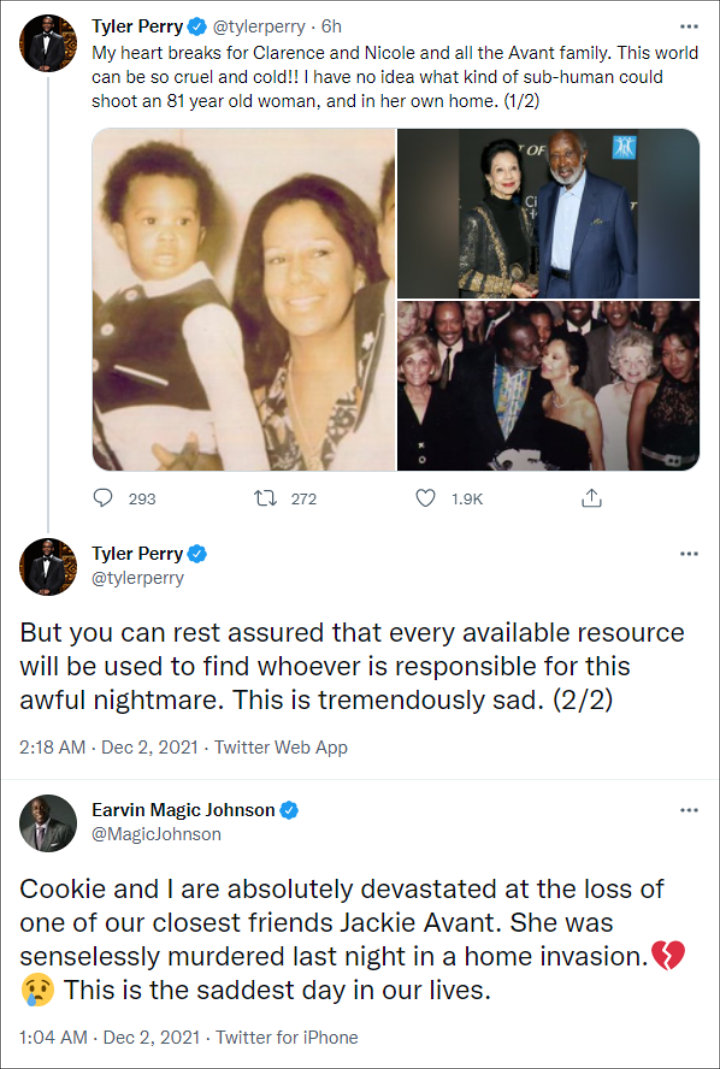 Jacqueline is survived by her husband Clarence, whom she married in 1967, daughter Nicole and son Alexander Avant.