The estranged couple and their eldest child North join the likes of Kid Cudi and Pharrell Williams at Louis Vuitton's re-presentation of the late designer's final collection in Miami, Florida.

AceShowbiz - Kim Kardashian and Kanye West have been spotted together for the first time since the rapper publicly expressed his wish to reconcile with his estranged wife amid her blossoming romance with Pete Davidson. The estranged couple stepped out on Tuesday night, November 30 to attend a presentation of the late fashion designer's final Louis Vuitton collection in Florida, Miami.

The reality TV star and the Yeezy designer brought their eldest child, 8-year-old North West, and were seated front row for the runway show. The three even posed for pictures together for fans at the event, going color-coordinated in matching black outfits.

The Louis Vuitton runway show titled "Virgil Was Here" featured all new looks from the fashion brand directly inspired by the late fashion designer, according to TMZ. It opened with words from Virgil encouraging adults to create like they were children. 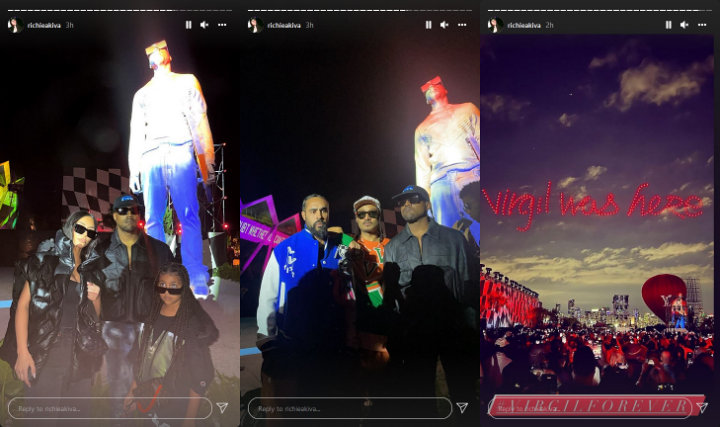 The show wrapped with the LV design team getting a standing round of ovation from those in attendance while Virgil's voice was heard saying, "Life is so short that you can't waste a day subscribing to what someone thinks you can do vs. what you CAN do," and a beautiful firework show illuminated the night sky.

Virgil died on November 28 after a private two-year battle with cardiac angiosarcoma, a rare, aggressive form of cancer. He was 41 years old.

On Monday, Kim paid a touching tribute to the creative director of Donda. "God doesn't make mistakes. I know that but I still can't help but ask why. Why Virgil?! Why him so soon? It's simply hard to understand why. I have a hard time understanding why so many pure souls were taken away so early," she wrote on Instagram.

"Virgil- you were always so gentle, kind and calm," the reality TV remembered her friend. "You somehow made time for everyone. We also talked about your superpower of calmness often. You always gave so much of yourself to the world because you wanted it to be doper. This one is hard to process… We will miss you so much Virgil and love you so much."

Meanwhile, Kanye wiped his Instagram page clean in the wake of his close friend's passing.