The Duchess of Sussex dazzles in a red hot Carolina Herrera gown while attending the 2021 Salute to Freedom Gala in New York to honor war veterans with her husband.

AceShowbiz - Meghan Markle isn't shy away from showing her true self, now that she's no longer a senior member of the British royal family. The former actress got daring when making a rare red carpet appearance with Prince Harry in New York City.

The couple turned up at the Intrepid Museum to attend the 2021 Salute to Freedom Gala on Wednesday, November 10, ahead of Veterans Day in the U.S. and Remembrance Day in the U.K. For her look that night, the Duchess of Sussex opted for a cleavage-baring red gown by Carolina Herrera.

The 40-year-old stunned in the sexy dress which also featured a slit on the front. She teamed the dress with pointed heels in matching color by Giuseppe Zanotti. Harry, meanwhile, sported a classic black suit and bow tie pinned with four medals and the cross for Knight Commander of Royal Victorian Order around his neck.

Both of them had a poppy brooch pinned to their ensembles. The matching floral accessories paid tribute to Remembrance Day on November 11 as the poppy symbol has been used since 1921 to commemorate military members who have died in war.

As for Meghan's makeup, she sported her signature subtle smokey eye and flushed cheeks, with her hair being pinned up in a sleek top knot bun. Her longtime makeup artist Daniel Martin shared on Instagram that Meghan's look was created with Tatcha skincare products and a Danessa Myricks Beauty eyeshadow palette. 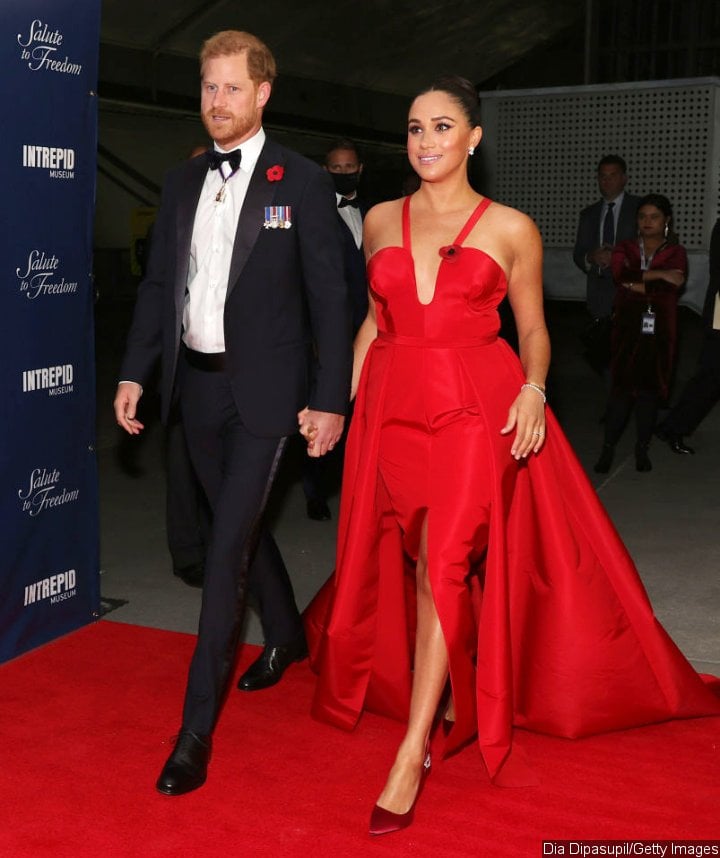 Prince Harry and Meghan Markle made a rare red carpet appearance at Salute to Freedom Gala.

On the red carpet, Meghan paid tribute to Harry when a reporter asked her, "Meghan, are you proud of your husband?" She smiled and responded, "I'm always proud of him, yes."

At the gala, Harry, who served in the British army for 10 years, presented the inaugural Intrepid Valor Awards to five service members, veterans and military families living with the invisible wounds of war. According to the Intrepid Sea, Air & Space Museum, which is hosting the event inside the "historic" aircraft carrier dubbed the Intrepid, the gala "recognizes extraordinary leadership and honors the brave men and women who serve in defense of our nation."

"We are so grateful to Prince Harry, The Duke of Sussex for honoring and amplifying the stories of these heroes and helping to raise awareness for mental health support for our men and women in uniform," said Susan Marenoff-Zausner, president of the Intrepid Museum, in a press release.

'The Masked Singer' Recap: 2 Stars Eliminated in Group A Semi-Finals