Will Poulter's Casting as Adam Warlock in 'Guardians of the Galaxy Vol. 3' Gets Mixed Responses

Confirming that the 'We're the Millers' star has landed the role, director James Gunn praises the 28-year-old British as 'an amazing actor and wonderful guy.'

Confirming the news, James Gunn retweeted Deadline's post about Poulter's casting and wrote along with it, "As you guys know I often strike down false rumors, so… um… Welcome to the Guardians family, Will Poulter."

Praising the 28-year-old star, the filmmaker gushed, "He's an amazing actor and wonderful guy." He went on confirming the November start of the production on the movie as adding, "See you in a couple weeks." 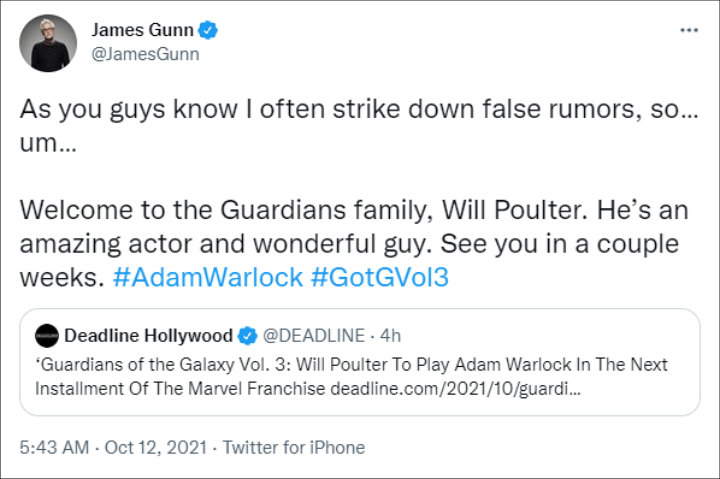 In the Marvel comics, Adam Warlock is an artificial human created in a facility called the Beehive by scientists calling themselves the Enclave. Also often called as Him, he was first introduced in "Fantastic Four" #66 (September 1967) in a story written by Stan Lee and pencilled and co-plotted by Jack Kirby.

The casting news was soon met with mixed responses by MCU fans. Giving an approval, one person tweeted, "He is a great actor." Another reacted to the news, "A+ casting, James. This dude is the real deal," to which Gunn replied, "He really is something incredible."

Someone else agreed that Poulter is "a great actor," but seemed to still have doubt about him playing Warlock. "Wil Poulter to play #adamwarlock … did I read that right? Interesting," the said person commented. "Kid is a great actor; I'm just tryna picture Adam warlock tho."

Some others, meanwhile, appeared to have different actors in mind to portray the character. "Not what I expected," reporter and media personality Van Lathan Jr. tweeted. Another remarked, "1 peculiar casting."

Someone else reasoned why he/she deemed Poulter unfit for the role, "Adam is supposed to be as strong as, if not stronger than Thor yes? Will doesn't even come close to the size and build of Chris [Hemsworth] nevermind the overall 'powerfully intimidating' look that Thor has when surrounded by tiny humans. How is Will supposed to be taken seriously as Adam?"

"Guardians of the Galaxy Vol. 3" is slated for a May 5, 2023 release in the U.S. Chris Pratt, Zoe Saldana, Dave Bautista, Bradley Cooper, Vin Diesel, Sean Gunn, Pom Klementieff and Karen Gillan are among stars returning for the movie.

Blac Chyna Yells at Fan to Get COVID-19 Vaccine at Miami Airport: 'Stop Being Stupid, H*e!'

James Gunn Unfazed by Riot Threat as He Hints at Rocket's Death in 'Guardians of the Galaxy Vol. 3'