Many believe that the one-half of City Girls is pregnant after she sports a fuller belly when performing onstage and rocks what looks like morning sickness band in her Instagram Story.

AceShowbiz - JT may be eating for two now. The rapper has got fans talking that she is possibly pregnant with Lil Uzi Vert's child following her recent appearance onstage and one of her latest social media posts.

The one-half of City Girls was spotted sporting what seems to be a baby bump when she performed with her groupmate Yung Miami over the weekend. In fan-taken footage of their show, the 28-year-old visibly had a fuller belly underneath her revealing blue jumpsuit that hugged her curves. Sharing the clip, one Twitter user remarked, okay JT pregnant.

Another fan found another alleged receipt of JT's supposed pregnancy in her new Instagram Story. Posting a video of her look for the recent performance, the raptress, whose real name is Jatavia Shakara Johnson, flashed what looks like a morning sickness band. 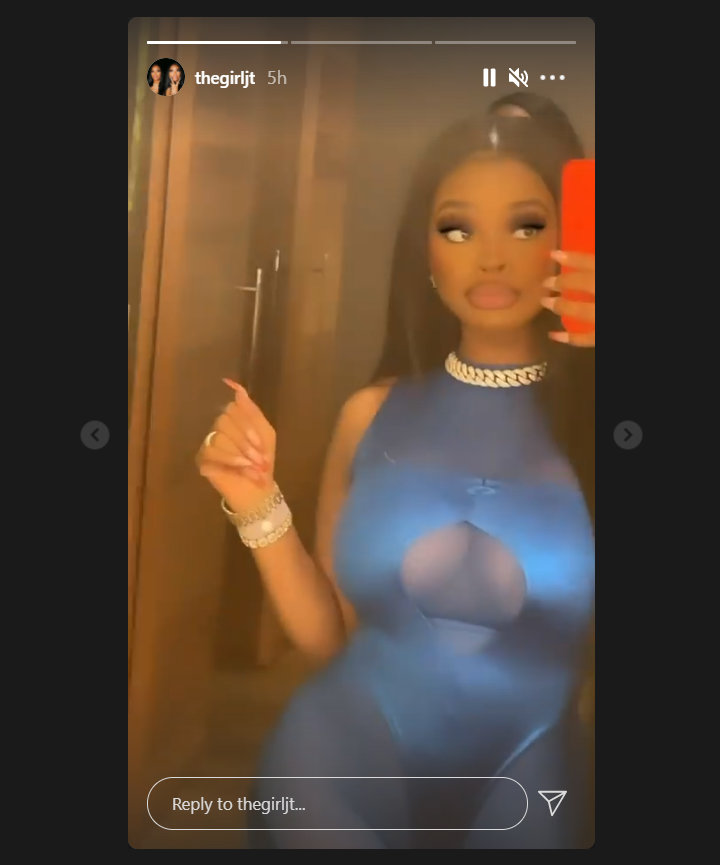 The clip first focused on JT's before it panned out to capture her full body. Near the end of it, she posed with her hand, which didn't hold the phone, up on the side of her body. The eagle-eyed fan noticed the suspicious-looking white band among JT's accessories and wrote over a screenshot of the clip, "@thegirlJT def pregnant! That's the morning sickness band I hand when I was preggy."

While neither JT nor Lil Uzi has confirmed that she is expecting a child, fans are convinced that she is indeed pregnant and her boyfriend Lil Uzi could be the father. "Oh She Having A Lil uzi," one person remarked. Another commented, "If true Congrats . They gone have some fun size chocolate babies." A third echoed, "they'll have a cute baby."

Some others were not happy should JT be pregnant with Lil Uzi's baby. "This is so embarrassing. Uzi will be no where to be found and JT is a gutterat with zero maternal instincts," one of them said.

"This is gonna sound harsh, but if she's pregnant shes a fool! This man for lack of better terms has showed you who he is on more than one occasion, yet she brings a child into this buffoonery?" another weighed in. "Furthermore, why are the rap ladies so hard up to get pregnant by these bums?"

Others, meanwhile, were not convinced that JT is pregnant. "damn maybe she ate before the show mind yall bidness," one argued. Another similarly claimed, "Naw she just a little bloated." Someone else responded to the speculation, "Damn u ain't allowed to have a pudge?"

JT Fuming Over Pregnancy Speculation: 'Y'all Just Getting Weirder and Weirder'

JT Unimpressed With Fan Edit of Her BET Awards Wig

JT Claps Back at Haters Mocking Her Wig at BET Awards

Dionne Warwick Questions Saweetie's Name: Why Is It Not 'Sweetie'?