Fans of the 'Keeping Up with the Kardashians' star are convinced that she is engaged to Travis Barker since she wears white accessories with a white bow and a mini shoulder-length veil for the outing.

AceShowbiz - Kourtney Kardashian may have dropped a hint at how serious her relationship with Travis Barker is. The "Keeping Up with the Kardashians" star sparked engagement rumors after being captured wearing a pair of bridal Minnie Mouse bridal ears during her Disneyland trip with the Blink-182 drummer, his kids and her youngest son.

In a photo shared by podcaster Amanda Hirsch on her Instagram account @notskinnybutnotfat on July 4, the 42-year-old reality star could be seen donning a white pair of Minnie Mouse ears with white bow and a mini shoulder-length veil at the back. She was accompanied by Travis' 15-year-old daughter Alabama who wore a classic pair of Minnie's ears with the red and white polka-dot bow.

"KOURT WITH A MINNIE VEIL (That was a weird thing to write lol) but i mean…. Disney lovers equivalent to sending ring hints!?" Amanda captioned her post. She then continued to spill in the comment section, "Also this was a pic taken with a fan (and shared but quickly deleted by Bama)."

Fans were quick to agree on what might have been behind Kourtney's choice of accessories. Many speculated that it's a sign she and her musician boyfriend are engaged to be married. "As a Disney Adult you DO NOT wear bride ears unless you are engaged/ just married. Reason being Cast members and Disney Guests will spend the day congratulating you as you walk through the park," one fan stated, while another chimed in, "No Disney fan wears the bridal gear unless there's a reason."

"Usually you wear that when [you're] a bride at Disney either pre wedding or post for honeymoon," a separate Instagram user commented. Additionally, another fan wrote, "WHOA weird. No Disney babes wear those ears unless you're legit getting married or not married. Local Disneyland girl here!!!" 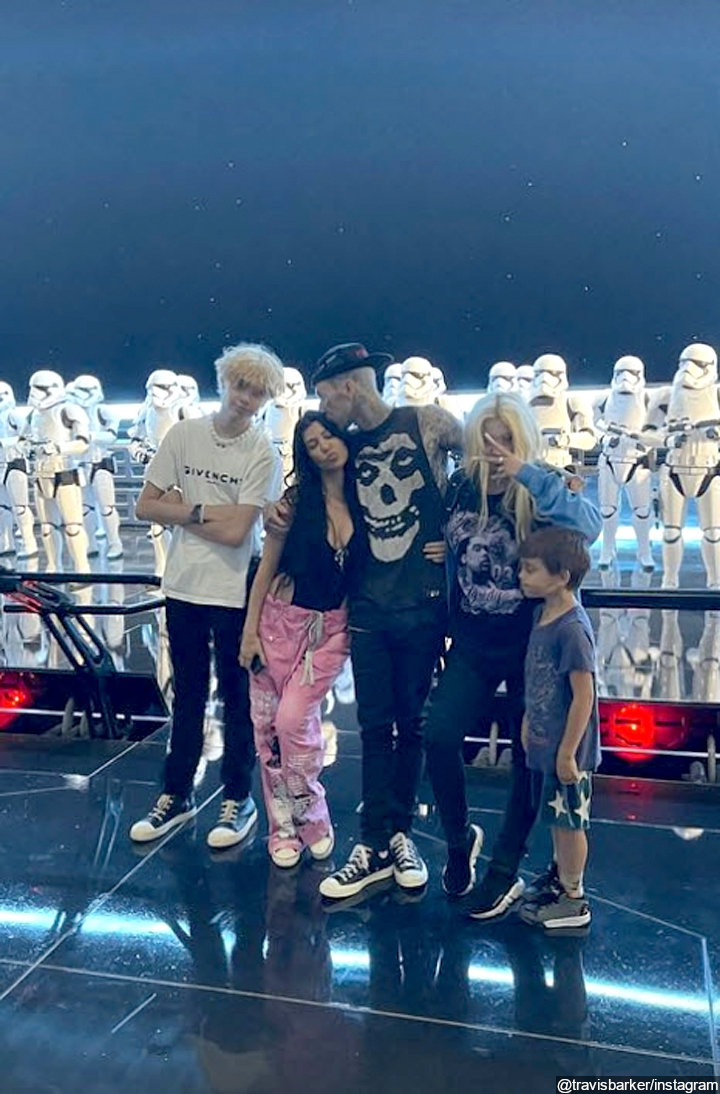 Travis Barker shared a glimpse at his Disneyland visit with Kourtney Kardashian and the kids.

About the family outing itself, Travis took to his Instagram Story to share a group shot at the Star Wars attraction. In the snap, the musician could be seen planting a sweet kiss on Kourtney as she stood alongside him and his 17-year-old son Landon, whom the drummer shares with ex-wife Shanna Moakler. Alabama and the Poosh founder's youngest son Reign also posed in the pic.