Jack Torrance, a character played by the 84-year-old actor in the horror movie, is seen spookily smiling in the black-and-white 'Overlook Hotel July 4th Ball 1921' photo.

AceShowbiz - A picture of Jack Nicholson's character in "The Shining" has caught fans' attention on its 100th anniversary. On Sunday, July 4, many people on social media shared their "wild theories" about the "Overlook Hotel July 4th Ball 1921" photo that saw hotel caretaker Jack Torrance spookily smiling along with dozens of other people in the ballroom.

The online debacle started after one individual posted the snap in question on Twitter. Alongside the image, the user penned, "Exactly 100 years ago tomorrow, the Overlook Hotel hosted the July 4th Ball in the Gold Ballroom with Jack Torrance fully visible in the foreground, sparking wild theories about what the hell this end scene of 'The Shining' meant."

Another person then joined in by writing, "I always thought each person in the photo was a victim of the hotel. The hotel took a lot of people!" In response, the former replied, "I've always believed Jack was doomed to be reincarnated over and over only to wind up at the Overlook to meet his fate."

"Kinda think Delbert Grady was Jack himself as he told him 'You've always been the caretaker,' " the user further noted. "[Director Stanley Kubrick] was a mad genius with his filmmaking." 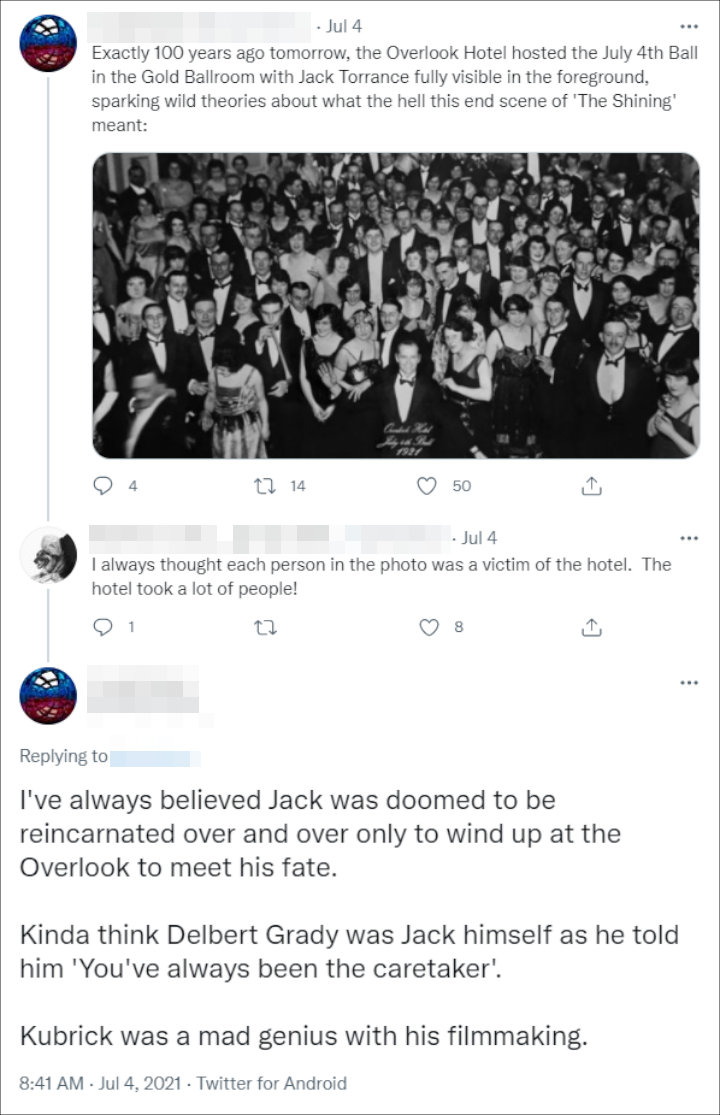 The "Overlook Hotel July 4th Ball 1921" picture was shown at the end of "The Shining". Many believed that Torrance had always been working in the resort and his soul couldn't escape from there even before he was hired again and stayed there with his wife (Shelley Duvall) and their son.

Kubrick himself previously addressed the nature of the photo. "The ballroom photograph at the very end suggests the reincarnation of Jack," the late director stated, according to The Take.