Firing back at critics after speaking out against cancel culture, the 'Fatherhood' actor claims that the backlash he receives only 'fuels' him 'to do more' as it 'makes this business fun.'

AceShowbiz - Kevin Hart has clapped back at critics after he shared his thoughts on cancel culture. After claiming that he doesn't "give a s**t" about the internet outrage and receiving negative reactions online, the "Fatherhood" actor shared on his social media account that he isn't bothered with the "hate" and "slender" stemming from his remarks.

"I got time today....," the "Get Hard" star began his series of tweets he posted on Tuesday, June 15. "The 'He's not funny' slander is the best....this is for you. I have 3 stand up comedy specials that fall in the top 10 highest grossing comedy specials of all time....2 of my specials are in the top 3 of all time," he tweeted to fire back at haters and those who think that he's "not funny." 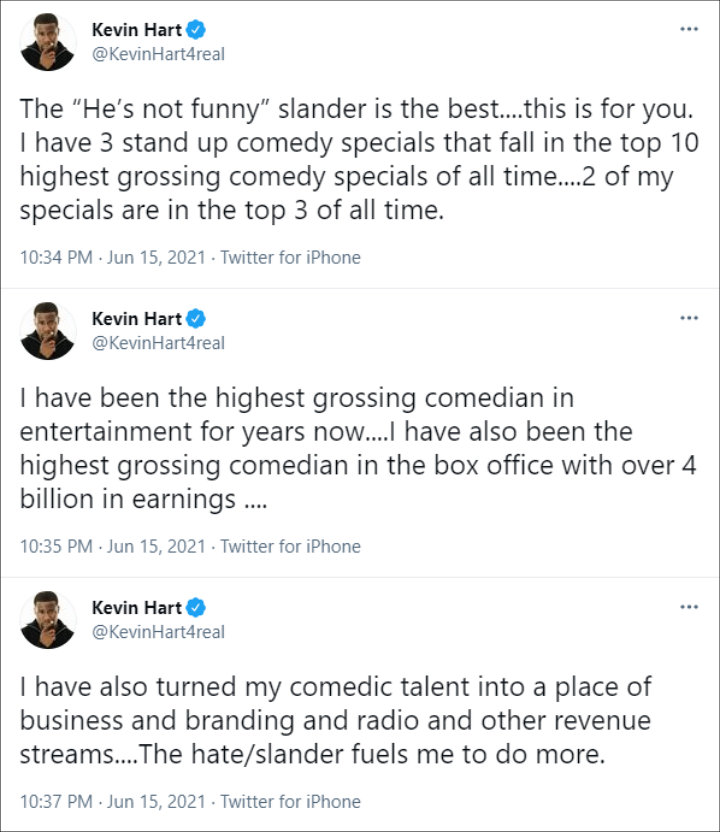 Kevin continued showing off his achievements in the past years, writing, "I have been the highest grossing comedian in entertainment for years now....I have also been the highest grossing comedian in the box office with over 4 billion in earnings ...." The 41-year-old comedian/actor added, "I have also turned my comedic talent into a place of business and branding and radio and other revenue streams...." He then pointed out that "the hate/slander fuels [him] to do more."

"You guys are what makes this business fun....because it's not about getting to the top....it's about doing your best to stay on top after you get there," Kevin elaborated further. He also reminded people, "I rarely talk s**t....but I felt the need to today. Stop believing these headlines and read the actual articles.... you guys fall for the banana in the tail pipe trick every damn time." He then concluded his post with a tweet that read, "J. Cole said it best 'If ur laughing at a millionaire the jokes on YOU' .....Now back to ur regularly scheduled program. Live love and laugh!!!!" 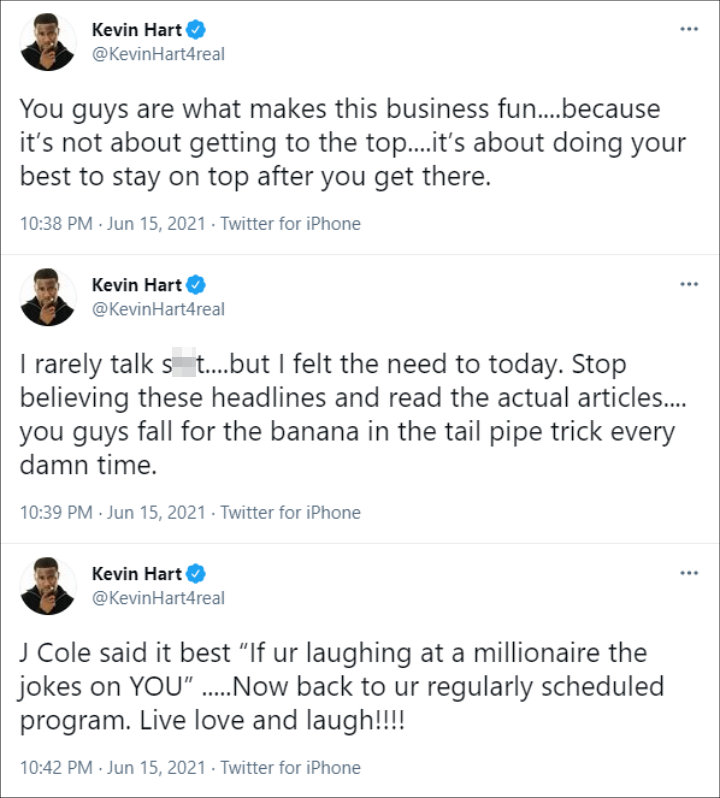 Kevin Hart pointed out that negative critics made 'this business fun.'

Kevin's statement came just two days after his interview with The Sunday Times was published. During the conversation, the comedian, who also appeared in "Jumanji: Welcome to the Jungle", claimed that he has been "canceled" three or four times, but he "doesn't give a s**t."

"If somebody has done something truly damaging then, absolutely, a consequence should be attached," the "Central Intelligence" actor revealed to the publication. "But when you just talk about… nonsense? When you're talking, 'Someone said! They need to be taken [down]!' Shut the f*** up! What are you talking about?"

Kevin continued telling the U.K. newspaper, "When did we get to a point where life was supposed to be perfect? Where people were supposed to operate perfectly all the time? I don't understand." Pointing out that being perfect is impossible, he said, "I don't expect perfection from my kids. I don't expect it from my wife, friends, employees. Because, last I checked, the only way you grow up is from f***ing up. I don't know a kid who hasn't f***ed up or done some dumb s**t."

"If you allow it to have an effect on you, it will," Kevin explained further to the outlet. "Personally? That's not how I operate. I understand people are human. Everyone can change."