Before he was taken into police custody, the 'Hall of Fame' rapper was said to have threatened to kill and thrown punches at an officer who pulled him out of his car.

AceShowbiz - Polo G has now got his freedom back. Just hours after he was arrested on battery on a police officer charge, the "Pop Out" rapper reportedly has been released from jail after posting a $19,500 bond.

The 22-year-old was let go from prison on Saturday, June 12, according to XXL Magazine. Following the release, he addressed his arrest on Twitter by writing, "1 of the officers told us they was (sic) on us since we got Off our Jet." He then added in another tweet, "They playin foul in Miami & dat s**t been like that for a minute." 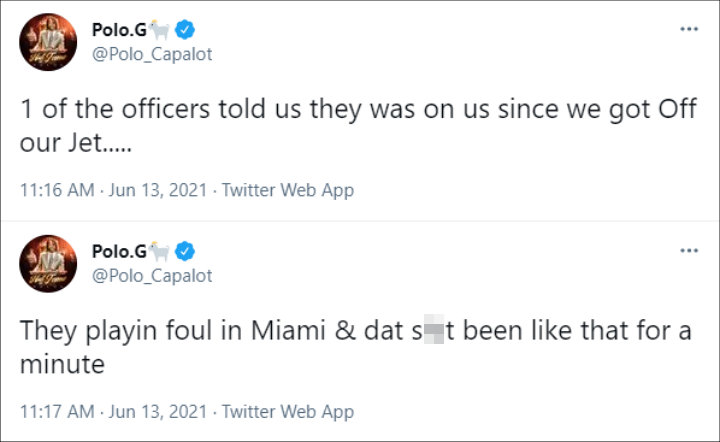 Polo G addressed his arrest after he got released from jail.

Polo was taken into police custody in Miami, Florida around 1 A.M. on Saturday. Prior to that, his Cadillac was pulled over because it had blackout tinted windows. When police asked the driver to lower the windows, the latter reportedly refused.

The MC also threatened the officer, "I will kill you, I swear I'll use these fists to beat the s*** out of you and knock your a** out." In addition, two guns were found in a black bag after police searched the hip-hop star's vehicle.

Polo himself was said to have hired Bradford Cohen as his lawyer to get his property returned including $15,000 in cash and more than $100k in jewelry. TMZ claimed that the attorney has filed a motion to get the valuables back. The lawyer also said in a statement, "We already have independent witnesses that are contradicting some of the statements of the police officers... We look forward to a full and complete hearing on all the facts and circumstances."