The former 'I Am Cait' star makes it clear that she is against the idea of 'biological boys who are trans competing in girls' sports in school' due to the issue of fairness.

AceShowbiz - Caitlyn Jenner remained defiant over her controversial stance about trans athletes. Having drawn backlash for opposing biological boys who are trans competing in girls' sports, the former "I Am Cait" star stressed that she is "clear about where [she stands]."

The 71-year-old former Olympic champion offered her clarification via Twitter on Saturday, May 1. She pointed out, "I didn't expect to get asked this on my Saturday morning coffee run, but I'm clear about where I stand. It's an issue of fairness and we need to protect girls' sports in our schools." 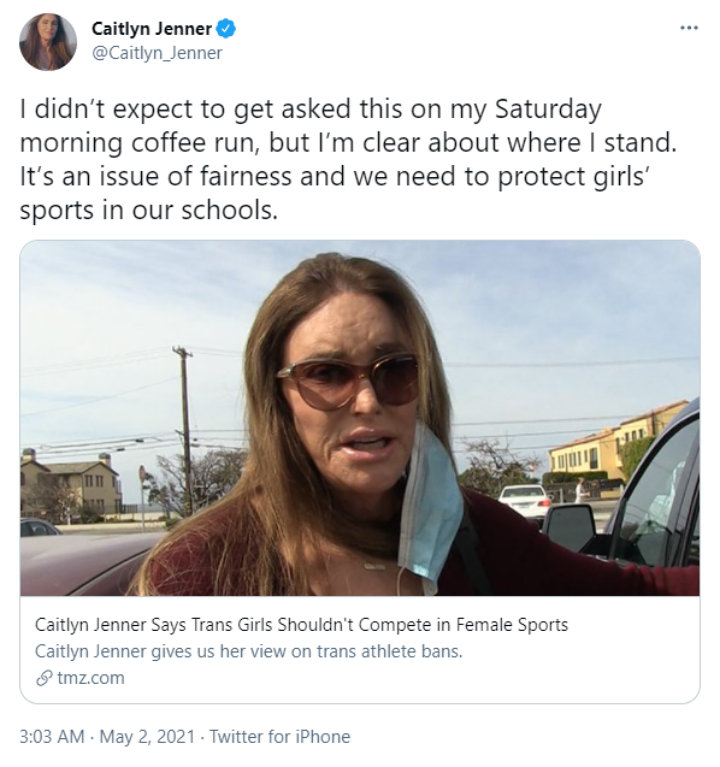 Earlier on Saturday, Caitlyn expressed her support for anti-trans bills that would ban trans children from playing on sports teams that match their gender identity. "This is a question of fairness," she told TMZ. "That's why I oppose biological boys who are trans competing in girls' sports in school. It just isn't fair. And we have to protect girls' sports in our schools."

Caitlyn has since received criticism from many on Twitter. One in particular was "Transparent" actress Shakina Nayfack who argued, "Caitlyn Jenner is classically uninformed, wildly privileged, and tragically self-hating. She can go protect the integrity of f**king herself."

Also hitting back at the father of Kendall Jenner and Kylie Jenner was George Takei. Making use of his own Twitter page, the actor penned, "Caitlyn Jenner is no friend of the LGBTQ community. Don't call her an actvist. She's a menace."

Trinity "The Tuck" Taylor added, "A trans girl is a girl. A trans boy is a boy. Everyones built different no matter what gender you are. Theres very small framed people and also larger framed muscular people all across the spectrum! STOP finding ways to delegitimize someone's gender." The "RuPaul's Drag Race All Stars" season 4 winner further raged, "SHAME ON U @Caitlyn_Jenner."

This came one week after Caitlyn, who is a trans woman herself, announced her intention to run for California governor. On Friday 23, she shared her official press release on Twitter and declared, "I'm in! California is worth fighting for."

Caitlyn Jenner Refuses to Admit Trump Lost the 2020 Election, Aspires to Become 'Disrupter' Like Him