Celebrating the success of his new track on the Billboard chart, the 'Just the Way You Are' hitmaker gives a shout-out to collaborator Anderson .Paak, and declares that they are just getting started.

AceShowbiz - Bruno Mars is back at the top of the U.S. pop charts with his new Anderson .Paak collaboration Silk Sonic.

The pair's "Leave the Door Open" rises from three to top the Billboard Hot 100 and become Bruno's eighth number one. Reaching the top in its fifth week, the song became Mars' quickest accession.

Mars now becomes one of 18 artists in the Hot 100's history with at least eight chart-toppers. His other No. 1 included "Just the Way You Are", "Grenade", "Locked Out of Heaven", "When I Was Your Man" and "That's What I Like".

The feat helped B.o.B's collaborator on "Nothin' on You" to tie the record held by Drake, Katy Perry and Rihanna.

Celebrating the success of "Leave the Door Open", Mars expressed his excitement via Instagram. "Cmon @anderson._paak We did it!! Thank you everyone for supporting this song. Y'all really Came throoooougghhhhh. And we're just getting started," he wrote. "Press play on #LeaveTheDoorOpen and let us all celebrate and romantically twerk together as one. #LetSilkSonicThrive."

Mars' collaborator, .Paak, turned to Twitter to share similar excitement. He tweeted, "[email protected] WE DID IT BRO!!! It is now safe to wear your bell bottoms all week!! #LeaveTheDoorOpen is the number 1 song in the country and I can't thank y'all enough! @brunomars we poppin bottles in the Stu today I'm otw champ! AAAAHHHHHHH!!!!!!" 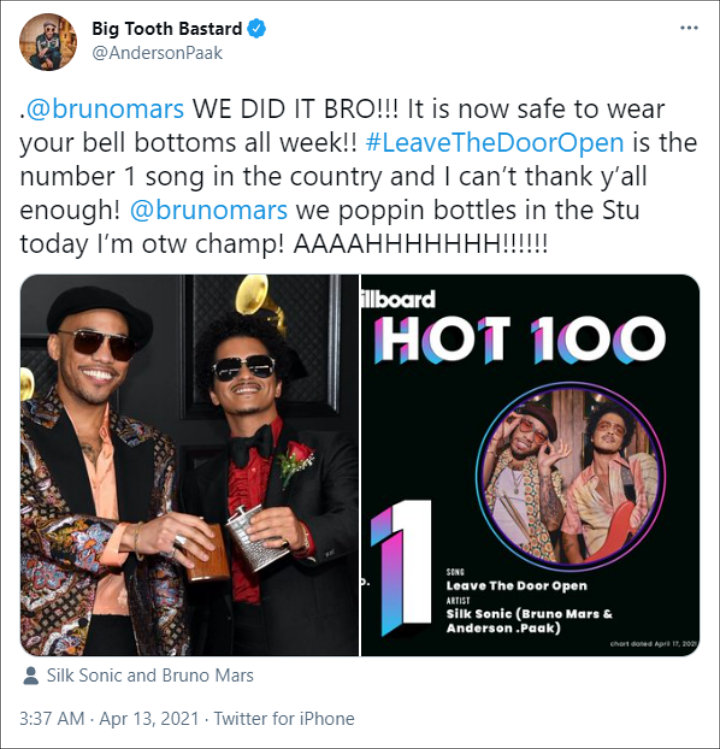 Marking the chart double on Monday, April 12, "High School Musical: The Musical: The Series" breakout star tweeted, "Ahhhh dl and deja vu on there!!!! screaming and crying!!!! thank u so much!!!!!!"