Kevin Hart Surprises Daughter With a Mercedes-Benz on 16th Birthday

The unsuspecting birthday girl, Heaven, comes home to a surprise party organized by her parents and looks genuinely in shock when she's shown the luxury SUV for her.

AceShowbiz - Kevin Hart successfully surprised his daughter Heaven as she turned 16 on March 14. The stand-up comedian and actor delighted the teen by gifting her a brand new black Mercedes SUV on her birthday with a giant red ribbon on it.

In photos and videos shared by bDASHd Event Planning And Bakery on their Instagram stories on Sunday, March 21, Heaven was seen coming home to a surprise party organized by her parents. The unsuspecting birthday girl looked genuinely shocked by the extravagant bash.

Wearing a black mask, an oversized donned a gray "Jaws" T-shirt over a long-sleeved white shirt and black trousers, she was escorted to the new car which was parked in what appeared to be the front of their house. Kevin was also seen accompanying his firstborn daughter.

Heaven was then seen checking out her new ride by opening the door and looking inside the luxury vehicle which is estimated to cost around $85,000. Later on, Heaven posed for pictures in front of the Mercedes with her father Kevin and step-mother Eniko Parrish. A number of friends and relatives were there to celebrate Heaven's birthday. 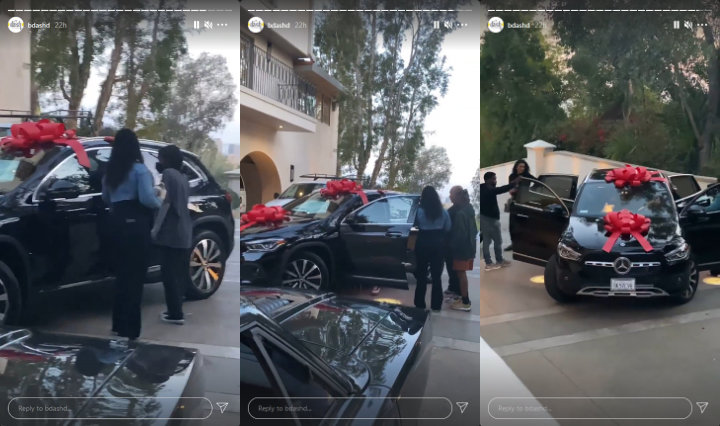 Heaven was surprised with a Mercedes-Benz by her father Kevin Hart as her birthday gift.

The lavish birthday celebration itself had "My Hero Academia" as the theme. Pictures of the manga series were seen filling the party from the wall decorations, the backdrop, the birthday cake, an outdoor movie theater, movie seating and a video game area to small details such as water bottles and whoopers.

Heaven is Kevin Hart's first daughter with actress and producer Torrei Hart. Kevin and Torrei also have a son named Hendrix. Kevin and Torrei filed for divorce in February 2010 after seven years of marriage. Their divorce was finalized in 2011.

Kevin Hart Hit With Lawsuit for Bailing on Party Appearance