The former Dallas Mavericks center suffered a traumatic spinal cord injury that left him paralyzed after a bike accident which happened a block from his home in St. George, Utah.

AceShowbiz - NBA legend Shawn Bradley suffered serious injury after being involved in a car-bike accident. The former professional basketball player, who played for the Philadelphia 76ers, New Jersey Nets and Dallas Mavericks during his career, has been left paralyzed after being hit by a car while riding a bicycle in January.

A statement released by Mavericks on Wednesday, March 17 detailed his condition after accident. The 48-year-old was struck from behind while riding his bicycle a mere block from his home in St. George, Utah.

Shawn suffered a traumatic spinal cord injury that left him paralyzed. After undergoing neck fusion surgery, the 7'6" former athlete has spent eight weeks in the hospital and has been undergoing rehabilitation.

"His very strong sense of faith is being tested as he participates in grueling physical therapy and learns how to cope with the challenges of paraplegia," the team said. "Doctors have advised him that his road to recovery will be both long and arduous, perhaps an even more difficult physical challenge than playing professional basketball."

The team, however, assured that Shawn "is in good spirits" despite his condition. The statement continued to read, "With his wife Carrie at his side around the clock, and supported by an amazing team of rehabilitation specialists and family, Bradley is in good spirits. He plans to use his accident as a platform to bring greater public awareness to the importance of bicycle safety."

The statement also included a message from Mavericks owner Mark Cuban, who reacted to the news, "We are saddened to hear of Shawn's accident. Shawn has always been incredibly determined and shown a fighting spirit. We wish him nothing but the best in his recovery. He will always be a part of our Mavs family."

Mavericks general manager Donnie Nelson added, "We are deeply saddened to hear of Shawn's injury and our thoughts and prayers go out to him and his family. In his eight-plus seasons in Dallas, Shawn demonstrated all of the qualities you want in a person representing your organization. He has always exhibited unwavering grit and determination and we are thinking of him at this difficult time. He is a Maverick for life." 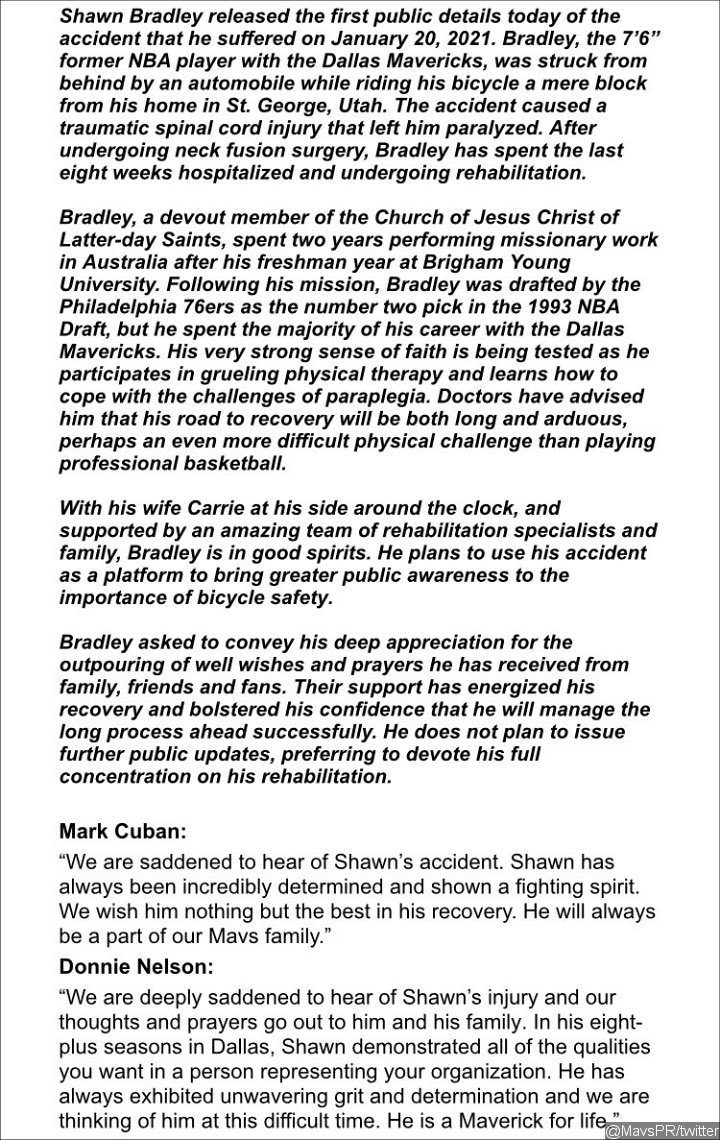 Dallas Mavericks released a statement on Shawn Bradley after a bike accident.