Cardi B Rips Comedian Out for Shading Her Hit Song 'WAP'

Conservative comedian Tim Young takes to Twitter to apparently throw shade at the Grammy-winning raptress for her raunchy song and liken it to books by children's author Dr. Seuss.

AceShowbiz - Cardi B was hitting back at a comedian who wrote a subliminal tweet about the raptress' hit track "WAP". In a post on Monday, March 15, conservative comedian Tim Young appeared to shade and liken Cardi's raunchy song to books by children's author Dr. Seuss.

"The lyrics to 'Wet A** P***y’ are more welcome in some schools than Dr. Seuss books," so the comedian wrote on the blue bird app. He went on adding, "just let that sink in for a minute."

Cardi caught wind of the tweet and didn't hesitate to fiercely respond. "When has a school made kids read the lyrics to wap?" the "Bodak Yellow" hitmaker wrote in a quote-retweet. "I get it wap might be a lil vulgar but stop comparing a sensual song to books that has RACIST content! How can ya not tell the difference?I see that common sense aint that common." 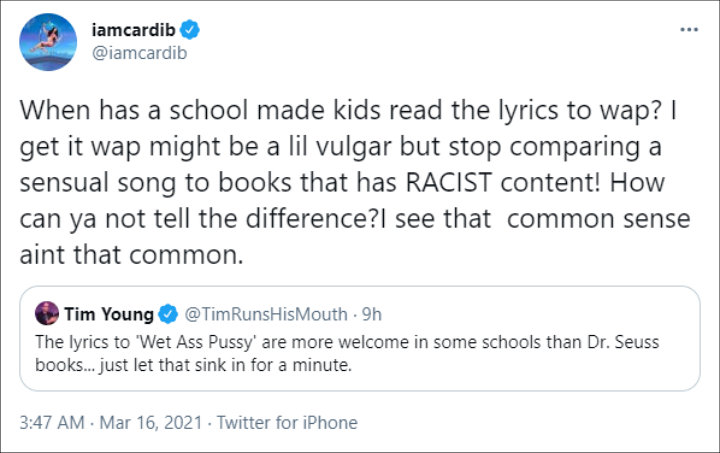 Cardi B clapped back at Tim Young for the shady tweet.
See also...

The wife of Offset didn't stop there as she continued to rant, "By the way Dr Seuss publishing company made the decisions to remove those books on their own .Black people are not the one telling these companies to do things that they think Is 'progressive' black only ask for equal justice."

She went on attacking conservatives, "Conservatives been making viral tweets comparing WAP to the banning of some of Dr Seuss books as if there's any correlations between the two ....Well I can DEFINITELY tell some of ya ONLY read dr Seuss books. cause ya mind lacks comprehension." 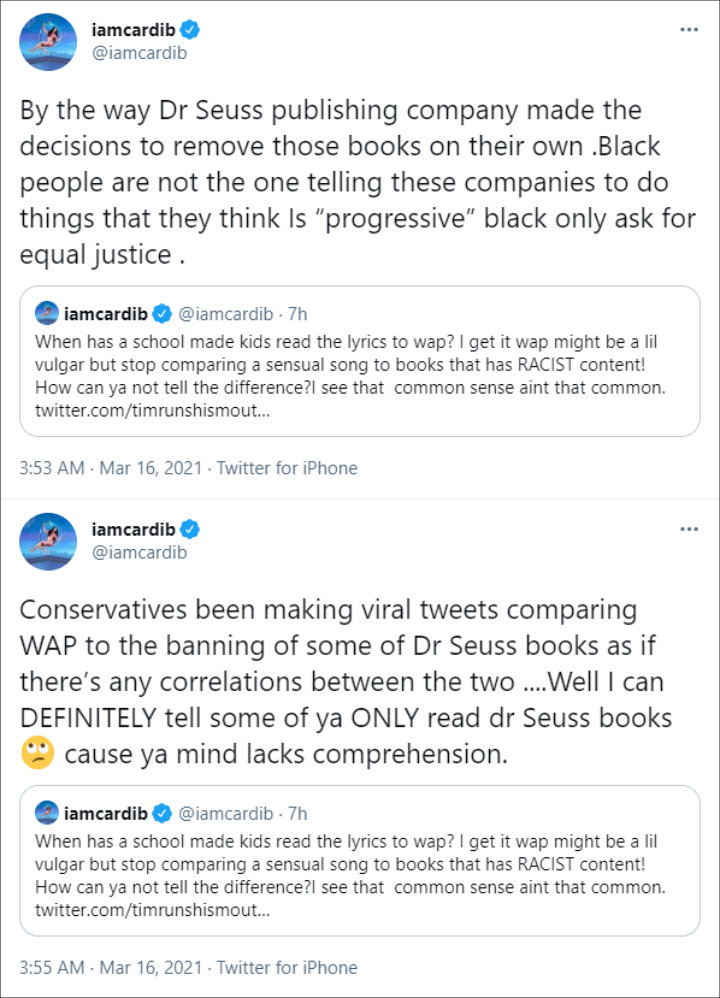 Fans rallied behind Cardi following her clapback tweets. "It's the dumbest take ever. Comparing a rap song to a children's book," one person commented. "They really will say anything and not stop to think if it makes sense. Your target audience is adults who want to dance and listen to music. Suess target audience is children. CHILDREN."

"Imagine hating female sexuality that much. Imagine negatively obsessing over a song so much that everything you disagree with it becomes the measure. Imagine how empty their life really is. We love you, Cardi. #WAPForever," another person wrote to the Bronx star. Meanwhile, someone advised Cardi to just ignore haters, writing, "stop giving the attention they're looking for miss girl."