After an Instagram user sent her a demeaning comment over her mirror selfie, Lexi Jones stresses that it 'feels good to love [her] body after years of hating and disrespecting it.'

AceShowbiz - David Bowie and Iman's daughter is not here for perverted and demeaning comments. Having learned that one of her followers on social media had twisted the intention behind her swimsuit selfie, Lexi Jones set aside time to hit back at the "dim witted" troll.

On Thursday, February 25, the 20-year-old beauty shared on Instagram a picture of herself rocking a brown one-piece with an embroidered horse design. In the accompaniment of the message, she simply gave away three smiling emojis wearing cowboy hats.

Lexi went on to rage, "But a shame that you're able to twist it into something so perverted and vulgar." She continued blasting the troll, "What a dim witted piece of trash and sad that there are more people like you. Go f**k yourself." 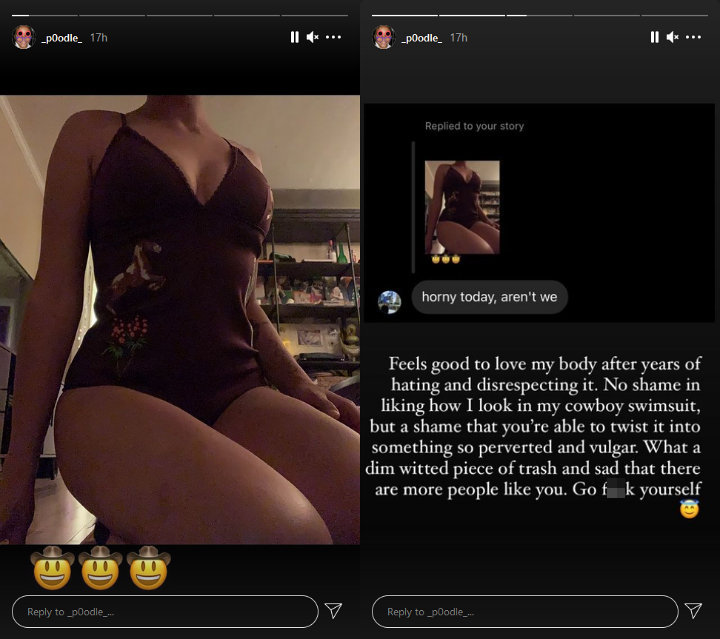 Lexi Jones slammed a troll who sent out a vulgar comment on her swimsuit selfie.

Lexi is the only daughter of David and Iman. Her late musician father also shared son Duncan Jones with his ex-wife Angela Bowie, while her supermodel mother is also a parent to Zulekha Haywood from her marriage to former basketball player Spencer Haywood.

Back in 2018, Lexi's mother opened up about how she and her late husband tried to protect their daughter's privacy. "She says I am overprotective," the 65-year-old mom shared in an interview with Porter magazine. "But I told her, this can all wait, it isn’t going anywhere. Have a life that is private while you can, because one day soon it is going to be public, so enjoy this."

During the discussion, Iman also revealed that she received many offers from modeling agencies for Lexi after she shared 18 snaps of her daughter to celebrate her 18th birthday. "Every agency, every designer, called me to say: 'If she wants to, we'd love for her to model for us,' " she spilled. "I said: 'No, she doesn't.' I know why they wanted her to model. It's because she is David Bowie's daughter."

Is Meghan Markle Hinting at 2nd Baby's Sex With Her Ring?

David Bowie Documentary in the Works